What Is The Best Non Legendary Pokemon

To wrap things up, we have saved the best for last. The Dragon Majesty Secret Hyper Rares, the set within a set, and the hardest cards to obtain within this set.

As mentioned towards the beginning of this article, the Dragon Majesty set contains 70 base cards, but in addition to this, there are eight more hidden treasures. The Secret Hyper Rares.

Featured first, are the four rainbow, Secret Hyper Rares. These cards as you will notice, feature some of the sets GX Pokemon that did not make the cut as full art Ultra Rares and are sure to amaze and stun anyone who pulls them fresh out of a pack.

Next up, we see some new cards that we have not yet discussed within this set. Which are the Dragon Majesty trainer cards, but in their gold, Secret Hyper Rare forms.

The Dragon Talon, Fiery Flint and Switch Raft make their appearances for the first time ever in the highly collectible full art gold form.

Finally, we have truly saved the best for last, which is the chase card of all chase cards contained within the Dragon Majesty expansion set, Ultra Necrozma GX 78/78 gold card.

This card alone, at the current time of writing can go for well over $100 dollars Canadian! Making it a massive hit and something to rejoice if you are able to count yourself as one of the few lucky ones that will be able to pull it from a booster pack!

First and foremost, we will look into the first of the hits contained within the Dragon Majesty set, which are the rare holos, which to many collectors, are still a favored and beloved piece of their collection, and who can blame them with cards such as the ones contained within this set?

The most desirable of these rare holos, to many collectors, is undoubtedly going to be the rare holo Charizard, numbered 3/70 in the Dragon Majesty set.

Wed predict that this is going to be the most sought after of the holo rares contained within the Dragon Majesty set for one reason and one reason alone.

Simply put, it is a Charizard, the most sought after Pokémon to collect and obtain, due to its overwhelming popularity.

Fortunately, there are many types of collectors out there and not all of them are Charizard collectors. Others will be happy to hear that there are a number of fan favorite dragon type Pokémon contained within this set.

To showcase a few more of the top hits contained within the base set of the Dragon Majesty set, we have one of our favorites of all time, Gyarados.

Additionally, along with a number of other rare holos contained within the Dragon Majesty set, are Altaria, Hydreigon, Altaria, Feraligatr, Zekrom, Kyurem and Kommo-o, all of which have a strong following and fans who love and adore them.

Next, we are going to get to the heart of the set, the cards that many collectors are hoping to pull and indeed, some of you already have, the Dragon Majesty Ultra Rares.

As you may of noticed, we have only shown six cards above, and you are correct in this, as the remaining four Ultra Rares are considered full art Ultra Rares and considered rarer hits, hidden within the Dragon Majesty set.

Not all of the Ultra Rare Pokémon were fortunate enough to make it to the full art Ultra Rare stage, however fear not, the others will have their time in the spotlight latter on in this article!

Carrying on with the trend of the last few sets, the Dragon Majesty set has two exclusive Prism Star cards, both of which are valuable and important cards to add to your arsenal and of which have already become great additions to numerous exciting decks.

The first of these cards is Victini Prism Star 7/70, who using the Infinity attack, a potentially powerful attack that helps you retrieve much needed energy from your discard pile.

The second is Lance Prism Star 61/70, a supporter that helps you recover after a recent knockout, accelerating your dragon type pokemon onto your bench.

Both of these cards, as with all other Prism Star cards, can only have one copy contained within your deck. 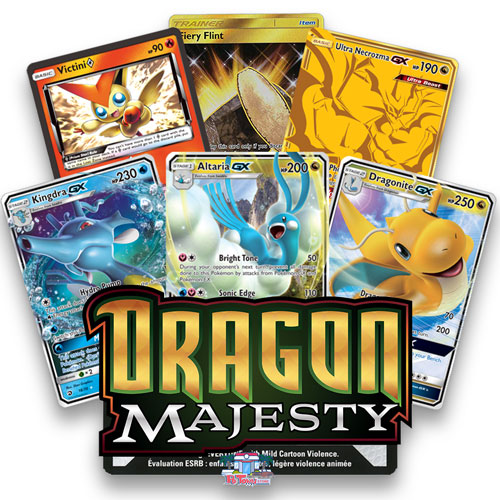 Although the cards that I am going to mention next are technically Ultra Rares, they deserve a section of their own, as full art supporters have become one of the most sought after and desirable hits contained within ANY Pokémon set.

Many collectors dedicate themselves to getting each and every full art supporter that comes out, a challenging, yet exciting task indeed.

Contained with the Dragon Majesty expansion set, are two full art supporters, Blaines Last Stand, and Zinnia. Both of which feature exciting, action based artwork, and who are now being frantically sought after by collectors hoping to add them to their full art supporter collections.

Prices are updated daily based upon Pokemon Dragon Majesty listings that sold on eBay and our marketplace. Read our methodology.

Pokémons latest hit set, Dragon Majesty, contains exactly what one would expect with a name such as it has, a plethora of powerful and beautiful Dragon type cards, plus as a bonus, a number of new trainer cards to give your latest Dragon buddies a powerful boost.

The main set itself consists of 70 cards, but it doesnt stop there, as many happy customers have recently learned after cracking open their packs.

Within the set, are hidden 8 secret rares, of which we are going to showcase throughout this article, but lets not get ahead of ourselves, as the entirety of this set cannot be overlooked, unless you want to pass by a number of fantastic and beautiful cards.