A Note On Pricing And Condition:

The examples throughout this text all utilize the Pokémon Charizard, who typically fetches the highest prices of any Pokémon from these early sets. Those looking to sell their collections should not expect Charizard-level pricing for other cards from these sets. While other Pokémon, like Blastoise and Venusaur, carry decent value, none approach the level of Charizard.

The pricing examples all note that the estimated retail pricing reflects a card in Near Mint condition. Finding cards from this era in Near Mint condition can be quite difficult. Pokémon cards are essentially pieces of a game, and many became treasured possessions of children who took them to school in their pockets to show off and trade. As a result, cards frequently show significant wear, which significantly affects their value. Unless exclusively stored in binders and played with in card sleeves , there are few Near Mint examples in circulation. In addition, cards that came from a household with heavy cigarette smoke, or that were stored in a damp attic or garage in the intervening years, can have a lowered value, even if the card physically appears otherwise Near Mint.

If you are considering selling your cards to a store, expect a much lower price than the retail price as stores would typically only pay between 30% and 60% of the retail value of an item.

These cards are the most valuable and rare of the Base Set print runs. This 1st print run was printed, distributed, and sold before Pokémania fully took root in the United States, making them extremely rare today, particularly in Near Mint condition. Collectors who do own these cards will typically have them authenticated and graded by a grading service such as Beckett Grading Services or Professional Sports Authenticator . These cards, graded or ungraded, if authentic, can carry significant value. For example, the above Charizard card could be worth upwards of $5000 or more to a collector in perfect condition.

There were reportedly six separate printings of the Unlimited Edition of the Base Set. The first five print runs had a copyright line that read: © 1995, 96, 98 Nintendo, Creatures, GAMEFREAK. ©1999 Wizards.. These five print runs are completely identical, with no way to differentiate between them. The final print run, which was only available in the United Kingdom, can be differentiated by a change to the copyright line which reads, ©1995, 96, 98 Nintendo, Creatures, GAMEFREAK. ©1999-2000 Wizards. Cards from the sixth print run are much rarer due to their limited geographical distribution.

Unlimited Edition made a number of aesthetic changes to the face of the cards. The overall card appears to be a lighter and brighter printing than the previous Limited Editions. The drop shadow was added behind the art box to add some depth to the card. In addition, certain text, such as the Pokémons HP value, was set in a bold typeface.

With five to six printings, these cards are by far the most common Base Set cards in existence, and their prices reflect that. Unlimited Edition was printed to meet the insane demand of a public that became obsessed with Pokémon. A Charizard from these printings could fetch about $500 in Near Mint condition from a collector.

The first print run of a set would have a special Edition 1 logo on the left side of the card, just below the card art. An enlarged example of this logo is shown here. The 1st edition print run would typically be very limited, and once sold out, would no longer be available for sale. In fact, the first print runs of a set were officially called Limited Edition.

The Series That Started It All 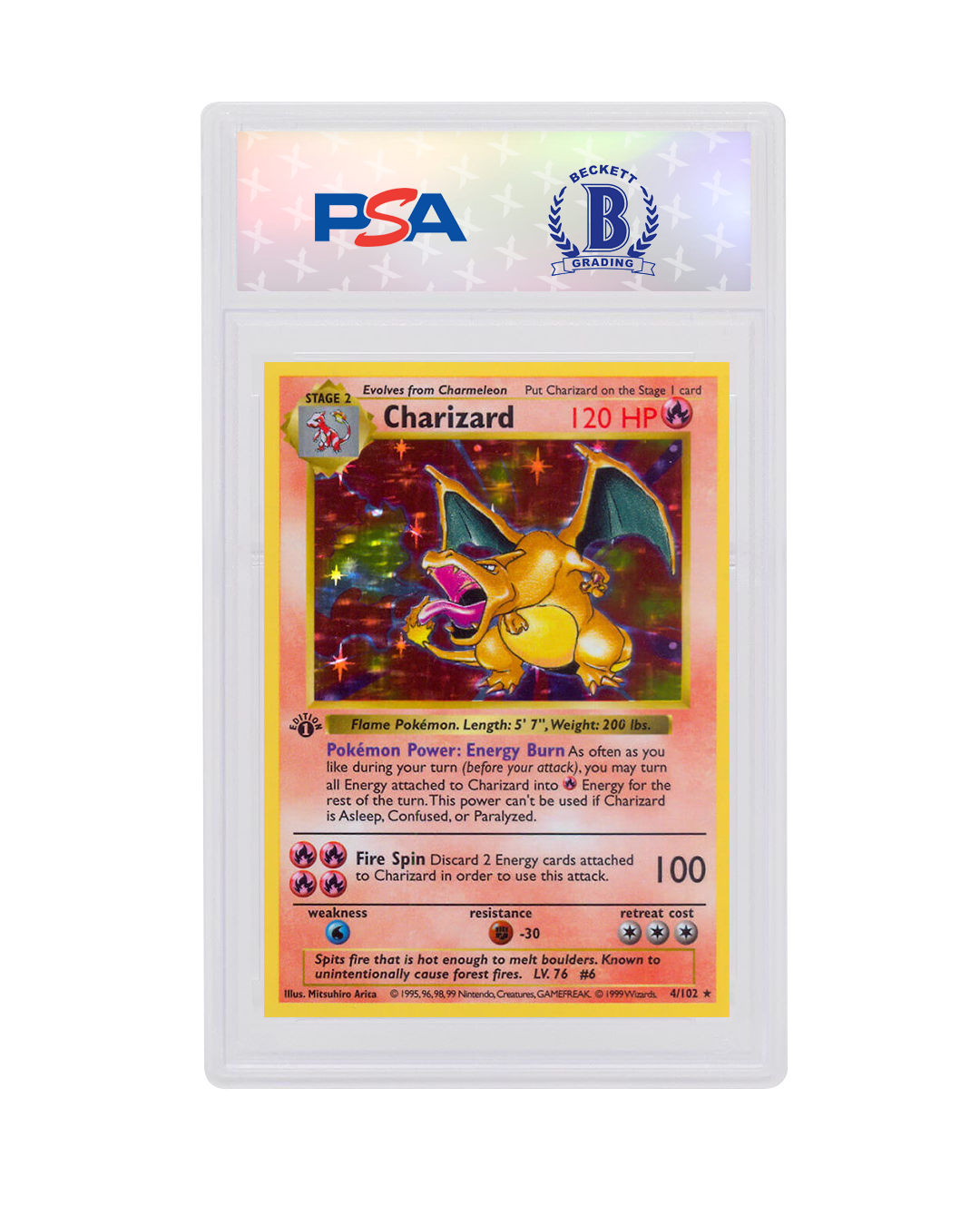 You almost have to be a fire-breathing dragon to fend off competition for a 1999 Pokémon 1st Edition Charizard card .

This dazzling holographic single, which highlights the extremely popular, fire-breathing Pokémon, has become the 1993 SP Derek Jeter of Pokémon cards.

“To put it into perspective, I remember reading on a forum that people were struggling to sell that Charizard card for $600 to $700 in PSA 10 in 2008, and now it’s probably $4,500 to $5,000,” shared Scott Pratte, a well-known Pokémon trading card expert. “The growth has been pretty significant.”

Robert Hebb, who has assembled the entire 1999 Pokémon 1st Edition set in PSA 10 grade, has noticed the same trend.


“Everyone wants that card,” he said. “It’s definitely the most iconic Pokémon card of the set, if not all time.”

But while prices for PSA 10 Charizard cards have soared, the demand for this single is nothing new.

“A lot of people, including myself, grew up in the schoolyard wanting the Charizard card,” said Jason Perdue, who’s just 23 and has built the registry’s No. 4 Current Finest, 1999 Pokémon 1st Edition set. “I never got one , but when I came back to the hobby 10 years later with disposable income, what card do you think I was going to go for? I wanted the Charizard.”

“The Charizard card, in particular, has phenomenal art,” said Perdue. “He’s breathing this huge flame and he just looks so menacing.”

Recommended Reading: What Is The Difference Between Pokemon Gold And Silver

Is My Pokemon 1st Edition Charizard Worth $50000

Before you start planning for a Scrooge McDuck-esque money bin , if you have an original Charizard, its probably not worth thousands of dollars.

However, the big driver of these massive sales is the condition. Theyre among the best of the best out there, which is reflected with the grades. Just two have been graded BGS 10 Pristine. As for PSA 10 copies, there were 110 at the time of this sale.


Even if your 1999 Pokemon 1st Edition Charizard Holo isnt in perfect condition, its still likely to draw interest and carry some value just like when it came out of packs nearly 20 years ago. It might just not be measured in tens of thousands of dollars.

What About Your Cards

“The regular Charizard card might be worth around Â£300,” Dan, from trading cards and collectibles shop Game HQ, tells Newsbeat.

“Most cards that people have will be the mass-produced ones so they wont be worth as much, but they can still be worth a lot of money as long as the cards are in good condition.

It might be time to ask your mum to dig out your old stuff, but if you do, which ones should you look out for?