Wartortle is a bit of a sleeper in the set. Despite being an uncommon, Wartortle is historically very tough to find in Gem Mint Condition. Some people believe this is due to the uncommon card slot in the original packs being in the front or back, leaving it open to frequent damage.


So you started collecting Pokemon Cards 20 years ago and kept them in mint condition because you knew they could pay off your student loans one day right???

Well, don’t we all wish that was the case! Even if you didn’t here’s our TOP #5 Most Valuable Cards from the 1st Edition Base Set. Don’t know what cards you have or which set they are from? Check out our guides to figure it out .

First things first a Top #5 list would be boring if we just listed all the holographic cards 1 by 1. Instead, we thought it would be interesting to pick the best in each class. So, our list ranks the Most Valuable Holographic Card, Non-holo Rare, Uncommon, Common, and Trainer. Everyone knows if they find a long-lost Charizard Holo in their closet to quickly sleeve the card and cash in, but doing the ranking this way might show you some sleeper cards out there you were unaware of, so check out below if you have any of these in your collection!

What Makes The Japanese Illustrator Pikachu So Valuable

This isnt just the holy grail of Pikachu cards. To many, this is the holy grail of all Pokemon cards because of its rarity. The card, which features artwork from Pikachus original illustrator Atsuko Nishida, was given as a prize to an illustration contest held by the famous CoroCoro Comic. What makes it so rare? Only 39 copies were printed, 23 of which have been graded by PSA.

What Makes The 2001 Holographic Birthday Pikachu So Valuable

A card that needs little introduction, especially as a reprint made its way into the new Celebrations set, the original Birthday Pikachu is a card much loved by collectors. It actually has its origins in part of a Create your own Pokemon Card campaign in 2000, where members of a local Pokemon League could submit their designs to Wizards of the Coast.

Interestingly, it was immediately banned upon its release as players could just claim it was their birthday to gain 50 extra damage on the cards attack! Wizards definitely avoided a few arguments there! Anyway, fast-forward twenty odd years, its no surprise that because of the cards design, popularity and history, PSA 10 versions are valued so highly. Another Sleeper Card in the set, Devolution Spray remains one of the toughest cards to find and grade in Gem Mint Condition and due to that it will consistently fetch high 100’s or $1,000 in auctions. While lower grades will garner lower prices , this is still a card to hold onto or dust off if you find it lying around your parents place.

Don’t Miss: All The Pokemon Names And Pictures

Whenever theres a set released with a special Pikachu chase card, you know its going to be something of value. This is especially true when it comes to the EX Holon Phantoms set from the EX Ruby & Sapphire era. Within the set, there are three gold star cards Gyarados, Mewtwo and of course, Pikachu. Note the little gold star next to the word Pikachu.

Now, with regard to pull rates, there was only one gold star card in every two boxes, meaning the chances of a Pikachu were 1 in 6 boxes! This helps to paint a picture of just how rare this card is. With only 98 PSA 10s in existence, and very few sealed EX Holon Phantoms booster boxes left in the world , you wouldnt expect the graded population to increase much in the future. Ultimately, this is a low pop, holographic, extremely rare chase Pikachu no wonder its worth so much!

What Makes The 1996 Japanese No Rarity Symbol Pikachu So Valuable

In 1996, the first print run of the Japanese Base Set cards didnt have a rarity symbol in the bottom right-hand corner. There is little documentation as to whether this was deliberate or a printing error, but what we do know is that very soon after, this was changed/fixed to include the symbol.

Collectors widely regard the no rarity symbol cards as the Japanese equivalent to the English 1st Edition Base Set. As such they have a low population and are highly valued by collectors.

What Makes The 1995 Japanese Topsun Blue Back Pikachu So Valuable

Although some people think Topsun cards are the first ever Pokemon cards because they say 1995 on them, this is to do with the trademark, and they were actually release in 1997. Japanese Base Set was first in 1996 of course. Anyway, these cards are still very old and valuable, and interestingly, there are plenty of iterations of them


There are known to be quite a few printing errors, and its common knowledge that there are versions with blue colouring on the back and also green on the back. Whats less known is that some of the versions dont have a number on it. The more common variant of this Topsun Pikachu would say 025 to the left of his name. Although, its a subtle difference, much like the no rarity symbol Pikachu above, the no number Topsun Pikachu is considerably rarer and more valuable.

Although PSA dont separate them in their population report below, only 22 PSA 9s exist and just 16 PSA 10s.

Pikachu remains one of the most popular Pokemon worldwide and despite this card being a Common it can typically sell for 100’s of dollars in Gem Mint Condition. Interesting to note about this card is the ‘Red Cheeks’ on Pikachu which was later changed to the color yellow in the Unlimited Set. You can only find the ‘Red Cheeks’ Variant in the 1st Edition Base Set and Shadowless Base Set and they typically sell for 2x the price of the Yellow Cheeks version and are considered more rare.

Fast same day shipping and tracking Card comes In Top Loader with a Number Seal!Card is PSA Ready, if it does not sell here it is in line to be Graded!!

Flip a coin. If tails, Pikachu does 10 damage to itself.
Weakness / Resistance / Retreat Cost:

All original content herein is Copyright 2022 TCGplayer, Inc. TCGplayer.com® is a trademark of TCGplayer, Inc. No portion of this website may be used without expressed written consent. All rights reserved. Magic: The Gathering and its respective properties are copyright Wizards of the Coast.Yu-Gi-Oh! and its respective properties are © 2020 Studio Dice/SHUEISHA, TV TOKYO, KONAMI.

No surprises here, the 1st Edition Base Set Charizard is one of the most iconic cards in the hobby. Collectors everywhere seek this one out for their collections. Have one is mint condition from your childhood??? You may have stumbled upon $20,000+ which can put a dent in those student loans.

What Makes The 20th Anniversary 24k Gold Pikachu So Valuable 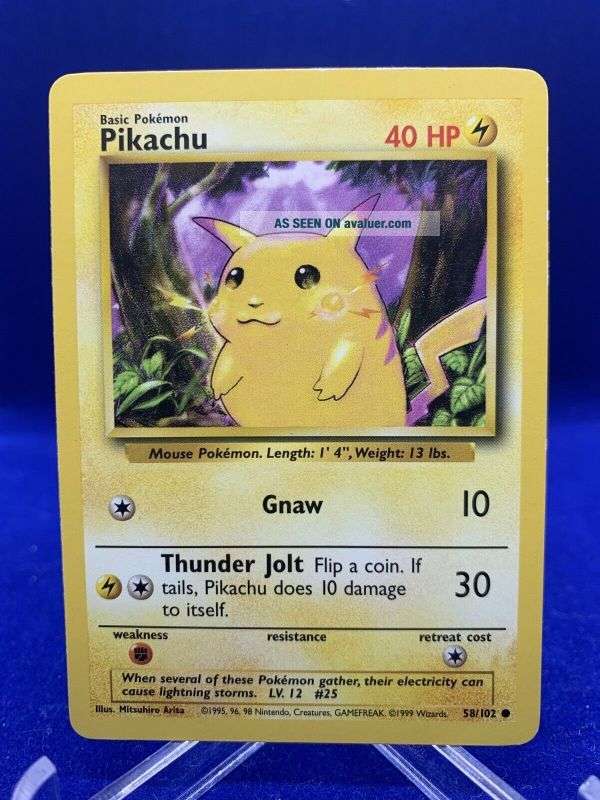 OK maybe thats a silly question Its made from frigging 24 Karat gold! But actually, the collaboration with Japanese jeweller Ginza Tanaka, combined with a limited pre-order window of 20 days, and an initial price tag of $2,100, its no wonder that this high-end collectible has increased six-times its value in only five years. Its wishful thinking, but how cool would it have been if theyd have done a select few red cheeks versions!!

The Rarest Most Expensive Pikachu Pokmon Cards Ever Bought

In this article were going to look at the most significant Pikachu Pokemon card purchases from this past year.

Thats a lot of Ps!

And although Charizard cards tend to top the charts in terms of price, our friendly little electric mouse is often a favourite among collectors, and therefore fetches high figures at auction too.

So lets get into it, starting with a card that widely accepted as the rarest in the whole hobby

What Makes The Japanese Topsun Prism Pikachu So Valuable

Japanese Topsun cards are a fascinating piece of Pokemon history. There were 150 cards, one for each Pokemon of course, with 16 cards designed with the prism holographic effect that you see above. Interestingly, each pack contained two sticks of gum, and two Pokemon cards! But heres where the rarity kicks in only 1 in 40 packs contained a holographic cardcan you imagine that these days?!

So, not only were they incredibly hard to pull, we then combine that with the ever-popular Pikachu character, and also a PSA 10 its no surprise this card went for 5 figures. In fact, only 14 PSA 10s exist making this one of the coolest, and rarest Pikachu cards in existence.

On a side note, I was lucky enough to find a raw version of the card on eBay at quite an acceptable price point. I expect itll get a low grade when I decide to submit it, as its definitely showing its age, but still, what a cool piece of Pokemon history to own!

Now this next Pikachu card is fascinating. At a glance, youd think this was a common Pikachu from the Expedition set. But actually a small collection of ten promotional sample cards were created to demonstrate at events how they worked with the e-Reader .

These cards were never released, but naturally leaked into the hands of collectors. So rare are they that only 22 PSA graded Pikachu sample cards exist. 16 of which achieved the PSA 10 grail status. These sample cards are a piece of Pokemon history, and quite a revolutionary development for the time. All of these factors make this particular Pikachu card extremely rare and highly sought-after.

TCG History: Base Set Pikachu and Its Various Variants

I love this story when the Base Set Pikachu card was sent for its first print run, Mitsuhiro Arita submitted the artwork with yellow cheeks. This is because when Pikachu launches an attack his cheeks turn yellow. Note the card design there are lighting bolts coming out, therefore hes attacking!

Employees of Wizards of the Coast, took it among themselves to change the cheeks to red because they thought hed made a mistake. How nuts is that?!

This was eventually corrected, so the vast majority of Base Set Pikachu cards youll come across have yellow cheeks. But of course, that makes the red cheeks versions highly sought-after and valuable.