Does Appraisal Matter In Pokemon Go

What Pokemon Can Be Dittos


Is Pokemon Good For Kids

How To Play The Pokemon Trading Card Game

Jacob was thrilled to battle me on a Sunday afternoon. I had no idea what I was in for, but I figured it was yet another made-up card game with rules that were as fluid as the ocean and always in his favor.

Little did I know that Pokemon TCG is a well-structured 60-card game with an established set of rules and a never-ending list of sub-rules. TCG stands for The Card Game.

All of a sudden, my sweet child spoke in tongue, or so it sounded like, when he rambled about his card having more health than mine. Clearly I didnt have the right energy cards to evolve the whole thing was an hour of my child schooling me and impressing me more than he did when he played the role of a Tree in his school play!

Much to my surprise, I found that the game requires strategy, discipline, memory and math A LOT of math!


Things finally started to make sense to me. Jacob is our little math nerd, so no wonder he fell in love with Pokemon. Here is a game centered around adding and subtracting, strategizing and remembering all the things hes awesome at!

Then I thought back to my own childhood, when I collected stationary, stickers, pretty pictures and post cards. Remember how much fun it was to collect things when you were a kid? Trading with your friends and working towards getting more of whatever it was you collected.

Now to quickly glance over the two different tournament styles :

You can buy a ready-made deck or build your own. If you buy one it will already conform to the rules, but if you do it yourself, you must make sure your deck fulfills the following requirements:

Personal Tip: To balance out your deck, try to have at least 20 energies and a good set of 15-20 Pokémon, basic and evolved. By the way, if you buy a pre-constructed deck, it should come with a play mat. These help you learn how to set up the game when you are first learning.

Pokemon: Why You Should Play The Trading Card Game 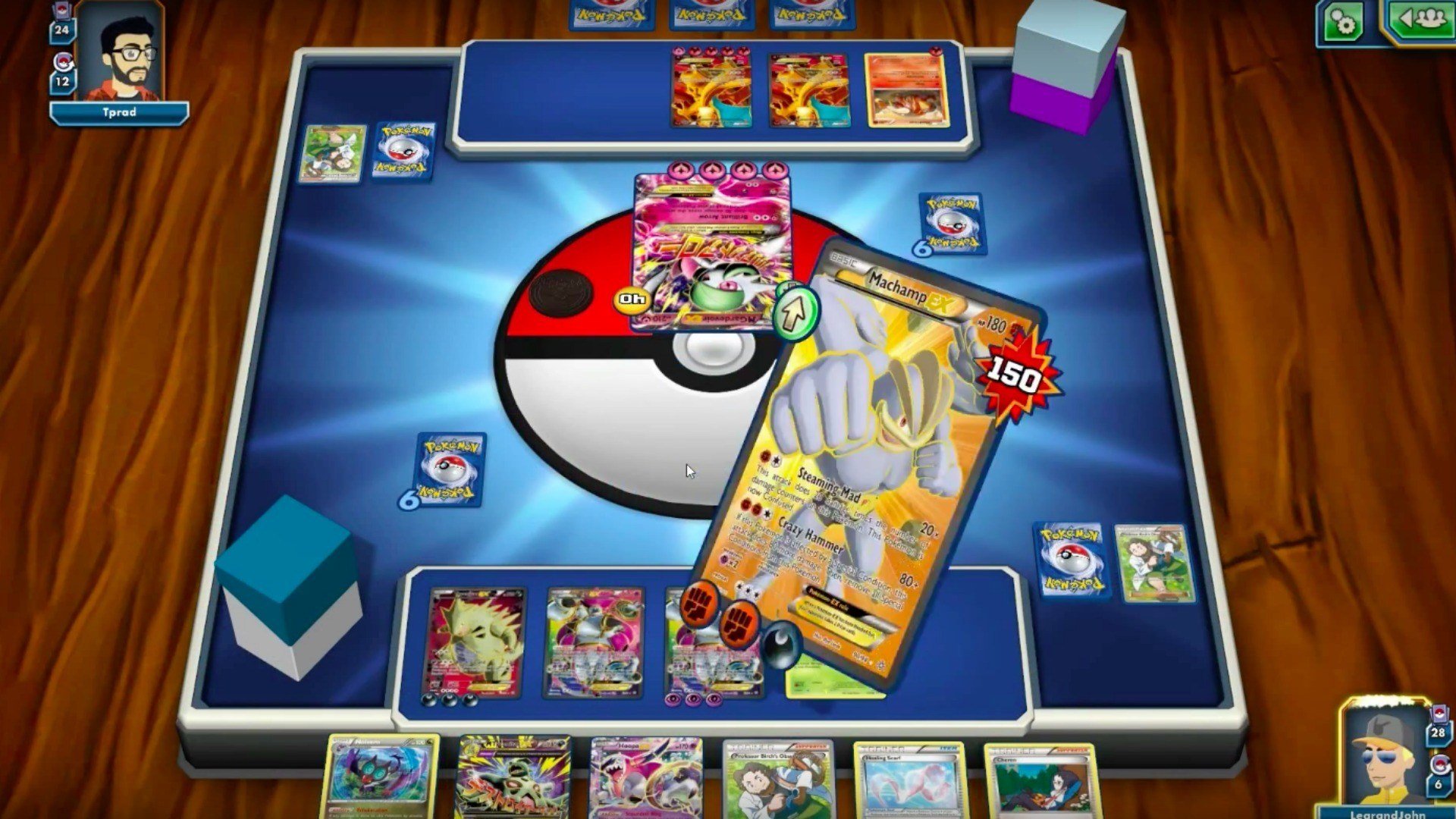 Pokémon TCG is a fun game with a nice community surrounding it, and it’s easy to get involved with…

New hobbies are hard to come by as an adult. Thats why we want to share our newfound passion for the Pokémon Trading Card game, which is commonly referred to as Pokémon TCG. If you havent really thought about Pokémon TCG since the cards were banned from your school playground, you could be in for a real treat if you decide to pick them up again.


For us, it happened by pure happenstance. It was a chat one day about the upcoming Pokémon video games Sword and Shield, and an expressed interest in replaying classic Pokémon games like Red and Blue, which led to a friend recommending that I revisit the Trading Card Game.

It didnt take long for a passion to form, and Pokémon TCGquickly became one of the most looked-forward-to parts of my daily life. Heres why that happened and how you can get involved too

What Pokemon Games Are On The Switch

I want to take the time to rate this app before I put in this new update since I never took the time to do so. This app is absolutely positively amazing. You dont need to put money to play you can play with people online you can play the computer you can build your deck when booster packs you can buy decks from earning points you can trade with people online and add your own decks and packs from the real world. Theres not much more you can as for. But what I can ask is that I would like an option to communicate with people while playing them online also able to message people if theyre off-line so that they may receive word from us when they return and lastly fix the mis haps with the data not recognizing me. I would have to force close app to re log as myself and not a new user. And option to customize background and background music could be pretty sweet. Other than that great work Pokémon TCG team great job


What Pokemon Game Should I Play

How To Earn Pokcoins In Pokmon Tcg Online

How to Play Pokemon the Trading Card Game

You cant buy them with real money, but there are a few ways to earn them, mostly through battling. Youll get a handful of PokéCoins as a reward for participating in any battle more if you win, based on how much damage you inflict on your opponent.

However, winning battles in the Versus mode takes you up a lucrative ladder of rewards: more wins, better loot. This is a great way to get booster packs, earn PokéCoins and obtain rare cards that rotate and reset every third Monday.

From here, it’s easy to expand your collection and build better decks.

Read Also: How Many Pokémon Are There 2021


Is There A Pokmon Card Game App

The Pokémon card game app comes with four decks for free. You can add Pokémon cards by scanning codes included with booster packs and decks, and trade cards online just as you would in person. You can also unlock free packs by playing games using the app.

A tutorial mode makes the Pokémon card game app a good way to learn how to play the Pokémon TCG, while the app’s deck builder can make figuring out how to build a Pokémon TCG deck with your cards easy.

The Pokémon Company is also working on cross-play ability between mobile and PC users via a new Pokémon Trading Card Game Live client. This will not only add cross-play, but new functions like the card ‘table’ being in portrait mode on phones – which makes battling that much simpler!

How To Tally Damage And Health Points


So you don’t lose track of what’s going on, this damage is tallied up with damage counters. You can use anything to represent damage: coins, rocks, sticks, pieces of candy, whatever. Each piece represents -10 points of damage. After the attack, figure out how much damage was inflicted and place that many damage counters on the damaged Pokémon. When the damage adds up to the amount of HP assigned to that Pokémon, then it is knocked out of the game.

You May Like: Pokemon Topps Trading Cards Tv Animation Edition

How To Play Pokmon Cards: Your Guide To The Pokmon Tcg

Looking to collect, trade, and play with Pokémon cards? Wargamer’s guide to the Pokémon TCG will have you battling in no time

So you want to learn how to play Pokémon cards? Youre far from alone. The Pokémon TCG was not the first collectible card game to be released but, 25 years later, its one of only a handful of 1990s-era TCGs that have survived. The games complexity and card synergies are a little lighter than Magic: The Gathering or Yu-Gi-Oh.

However, there are still enough tactical and strategic elements within the game to keep older audiences engaged. Indeed, fans of the Pokémon franchise, regardless of age, will enjoy the TCGs ability to capture both the spirit and theme of the anime. Pokémon battle, grow in power, gain new abilities and evolve. Beloved characters, locations, and items from the show all appear in card form. Even the idea of capturing Pokémon , is mimicked in the games card-collecting aspect.

With a quarter-centurys worth of expansions behind it, and multiple products available for purchase, it can be devilishly difficult to know where to start. Thats where this guide comes in it aims to start you off on your journey to being the very best Pokémon trainer, like no one ever was.

With no more ado, then, lets get straight into that long grass and meet some wild Pokémon!

How To Set Up The Pokemon Tcg

Players shuffle their 60-card deck and draw a hand of seven cards. Each player then places a Basic-level Pokémon , face down. This is their active Pokémon, which can battle and take damage.

After drawing your hand, you draw and put aside six prize cards

If a player does not have a Basic-level Pokémon available, they must reveal their hand to their opponent, shuffle their cards back into their deck, and draw seven new cards. This is called a mulligan. Each time a mulligan is performed, the opposite player may elect to draw an extra card. Players can then place up to five Basic-level Pokémon, face down, onto their bench area. Next, players draw another six cards from the top of their deck and place them face down to the side of the play area. These are your Prize Cards.

You May Like: How To Use Pokemon Universal Randomizer

If youre ready to move from battling AI trainers to playing real people, youll need to head to the Versus mode – and make sure you have a legal deck.

TCG players will likely be familiar with the Standard and Expanded formats the former currently allows cards from the Sun & Moon – Ultra Prism series to present, and Expanded allows cards from Black & White onwards. These formats also allow a host of other cards from select expansions and releases , which are the same for Pokémon TCG and TCGO, and can be found on the Pokémon website.

However, Pokémon TCG Online also boasts two other formats that you dont usually see at in-person events: Unlimited and Theme.

Theme is self-explanatory: this fun format only allows the use of theme decks. This is where the likes of Charizard in Relentless Flame, Groudon in Towering Heights or Rillaboom in, well, Rillaboom, rule supreme. The Theme format is in great shape at the moment, and is perfect for getting to know the ropes of online battles.

The Unlimited format allows any cards that have ever been legal, which leads to some broken combinations of cards that never appeared together in Standard or Expanded formats. Expect to face first-turn losses or to be locked down and unable to do anything in your turn thanks to unique pairings in this format.

How To Get Your Pokemon Collection Started:

The first step in getting your childs Pokemon card collection going is to buy a . Your child needs at least these 60 cards to get a game going

Pokemon comes out with new series a few times a year, so of course your kid is going to want booster packs from the latest series because well, its Pokemon and its something new.

In order to prevent the cards from covering every square inch of the floor in your kids room, you may want to set him up with a binder and plastic sleeves, also to protect the cards. We use regular 3-ring binders for our Pokemon cards and the plastic sheets you may have used for your childhood collection of baseball cards.

I asked Jacob tonight for the best way to organize cards. He recommends that smaller collections start sorting the cards by energy type, which is the symbol in the upper right-hand corner.

What Is The Next Pokemon Game

Learning To Play The Pokmon Tcg

How To Play Pokemon Trading Card Game (TCG) Learn To Play In Less Than 15 minutes!