Nintendo recently released a Pokémon: Lets Go Pikachu and Eevee themed Switch bundle to the delight of many Pokémon fans.

Each bundle includes a Nintendo Switch Pikachu & Eevee Edition system, the Poké Ball Plus accessory and a pre-installed version of Pokémon of your choice Pokémon Lets Go, Pikachu! or Pokémon: Lets Go, Eevee!

The colors of the new switch version match the iconic colors of Pikachu and Eevee.

Here are some images of the Pokémon: Lets Go Switch Version for you to drool over. As you can see, the back of the device itself has silhouettes of different Pokémon monsters printed on them.

The Nintendo Switch Joy-Con controller on the left is painted in Gold, while the one on the right has a lighter shade of Yellow. Both colors compliment Eevees and Pikachus illustration on the Dock.

The Pokémon: Lets Go Switch Version when its docked

The back of the Pokémon: Lets Go Switch Version featuring silhouettes of Pikachu and Eevee in different poses.

A closer look at the Pikachu and Eevee Pokémon: Lets Go Switch Joy-cons

The newest Nintendo Pokémon Switch bundle is expected to be released on November 16.

Pre-orders are now available in some stores in the US while pricing and availability details here in the Philippines are yet to be announced. The Bundle is priced at USD399 or an approximate cost of Php21,500 when directly converted to Philippine Pesos.

After yesterday’s out-of-the-blue announcement of a Limited Edition Nintendo Switch bundle to celebrate the release of Let’s Go Pikachu and Let’s Go Eevee later this year, GAME has now listed both bundles for pre-order, costing £339.99.

The Limited Edition Pokémon Let’s Go Switch bundle features the console itself, a unique set of Joy-Cons , a digital copy of either Let’s Go Pikachu or Let’s Go Eevee, a unique Pokémon designed Switch dock and the Poké Ball Plus controller. In addition, the back of the Switch console itself features silhouettes of Eevee and Pikachu all over.

It’s a pretty nice package all-in-all, and the first place to put it up online for pre-order so far has been GAME in the UK – where you can pick up the Let’s Go Pikachu Switch bundle and the Let’s Go Eevee Switch bundle for £339.99 each.

This is the first time we’ve seen a limited edition Switch bundle that didn’t just feature coloured Joy-Cons and a digital copy of a game and may well end up being the first of many fancy Switch dock designs we see going forward.

At the time of writing, the bundles aren’t available on either or , though listings are likely to go live any minute now, so feel free to keep an eye on those pages, too. It’s also worth keeping an eye on the Nintendo UK Store, too, as listings go live there and stock is usually quite generous.

Will you support Eurogamer?

In additional news, Nintendo announced a Switch Bundle which features Pikachu and Eevee-themed controllers, and a Poke Ball Plus. The front of the dock features Eevee and Pikachu, while the back of the console has silhouettes of both Pokemon.

Releasing November 16 alongside the game, the bundle also includes a digital copy of either Let’s Go, Pikachu or Eevee. It is available for pre-order now and will run you $399.99 or the regional equivalent.

Switch Gets An Adorable Bundle For Lets Go Pikachu & Eevee

Lets Go! get ourselves an adorable limited edition Pokémon Switch bundle. If youre from Europe and havent snapped up a Switch yet, you may be in luck. Nintendo of Europe has announced that two bundles will be releasing alongside Lets Go! Pikachu and Lets Go! Eevee on November 16. Aptly enough, one bundle contains a pre-installed Pikachu version, with the other containing a pre-installed Eevee version this comes alongside an included Poké Ball Plus and themed Switch.

Possibly the most interesting part of this bundle is that the Switch dock and system itself are clad with the titular Pokemon. This marks the first time, outside of the Japanese exclusive Monster Hunter XX bundle, that a Switch system has looked quite unique beyond its Joy-Con colors. Speaking of Joy-Con, the pair included are yellow and brown, and look surprisingly delightful.

There is currently no price announced for the Pikachu & Eevee bundles, nor is there any word on a release for North America. However, that information may not be far off as they might feature in the recently delayed Direct. Either way, we will find out in the near future.

What do you think of the bundle? Will you be picking it up when it drops in November? I know I wish I had the funds for this bundle. Tell us what you think down below! 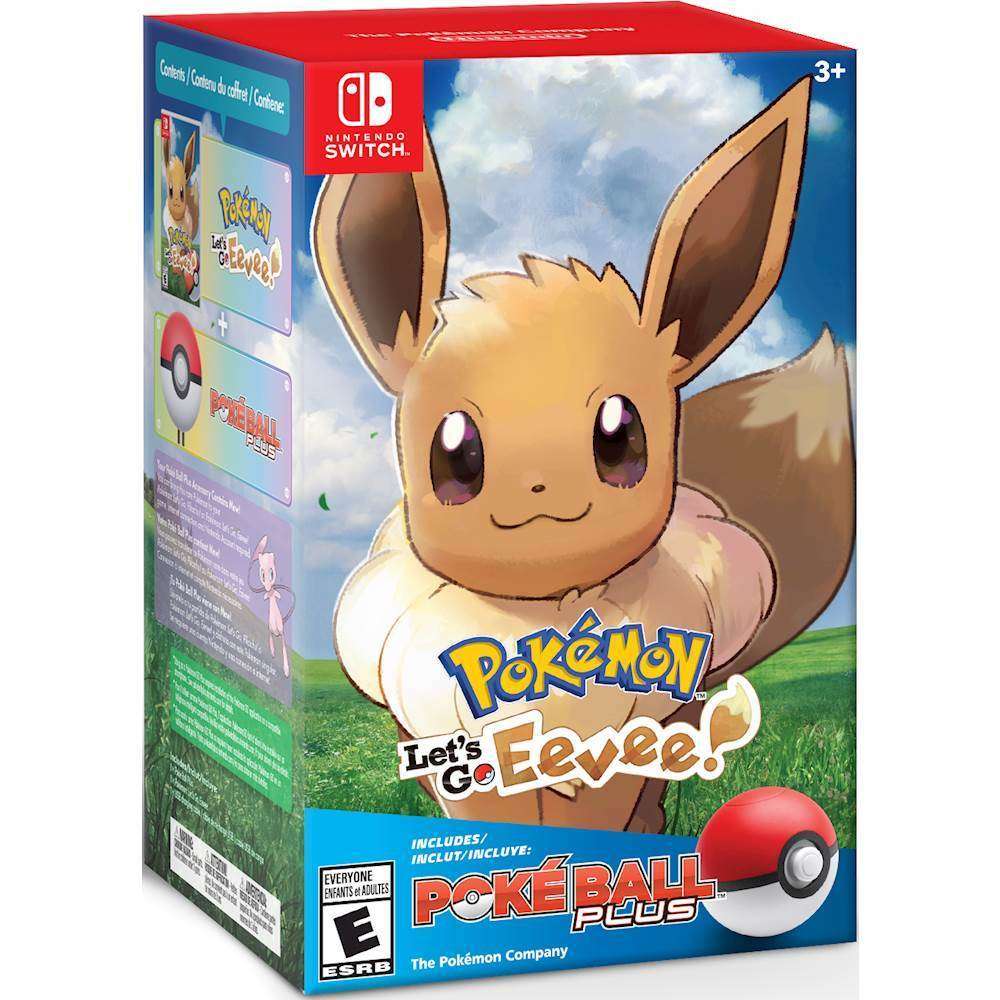 The Pokémon Company International and Nintendo announced new details about exclusive Pokémon moves, Secret Techniques, and much more, that are coming to the highly anticipated Pokémon: Lets Go, Pikachu! and Pokémon: Lets Go, Eevee! games, releasing on November 16th on the Nintendo Switch system. Both games are designed for players taking their first steps into the Pokémon video game world as well as for longtime fans wanting a new way to play Pokémon.

Check out the gameplay and bundle trailer of Pokémon: Lets Go Pickachu! and Eevee!, featuring some gameplay footage:

Nintendo has announced that they will be bringing a Pokemon Go themed Nintendo Switch and dock to fans, the Pikachu and Eevee themed Switch bundle will be available on November 16.

There are several different options for those planning on grabbing Pokémon: Let’s Go, Pikachu! and Let’s Go, Eevee! physically. You can grab the game on its own, of course, but you can also go the extra mile and grab it with a lovely keyring.

There’s also the option to get the Poké Ball Plus in the box for a little bit cheaper than buying them separately. If you’re sold on the Plus, get this edition.

In terms of gameplay, wild Pokemon battles don’t exist in the Let’s Go games although you can square off against multiple trainers. One of the reasons for choosing Eevee was the Pokemon’s popularity over the years. In Pokemon Yellow, your rival used Eevee and it’s been used as a partner to Pikachu. Speaking of Pokemon specifics, you can gain access to a new special Pokemon if you link Pokemon Go to Pokemon Let’s Go via Bluetooth.

If you’re a fan of video games, check out Transition, Gadgets 360’s gaming podcast. You can listen to it via Apple Podcasts or RSS, or just listen to this week’s episode by hitting the play button below.