Fire-types are often widely beloved by fans, and the best Fire-types are nothing but abundant. You have a ton of choices when looking for a good Fire-type Pokemon, especially with how many Legendaries, Starters, and Mega Evolutions sport the type and great offensive prowess.

The current reigning is Mega Charizard Y, though its grip on the top spot is shaky, with Mega Blaziken looming just around the corner, ready to pounce and take its place. One of a handful of Pokemon to reach a TDO over 1,000 , M-Charizard Y is going to really tear through the competition. Mega Charizard X is also fantastic, while slightly lower in terms of overall damage output compared to its twin. However, X doesn’t have the double weakness to Rock like Y does, which is something to consider. It falls behind the other Mega ‘zard in overall TDO and DPS, but it’s still one of the best Pokemon on the game, and the boost it gives to other Dragon-types while it’s on the field is not something to ignore. Keep X to being a Dragon-type attacker, and let Y take up the Fire-type mantle of the family.

Shadow Moltres, which also suffers from that double Rock-weakness, surpasses Mega Charizard X in terms of DPS, but only slightly, and falls behind on TDO. Despite this, it’s one of the best Pokemon in the game, and will absolutely dominate as either a Fire-type or a Flying-type dealer’s choice.

RELATED:Pokemon GO: Which Pokemon Are Attracted To Each Lure

How To Catch Grass Pokemon In Pokemon Go

Grass-type Pokemon like Oddish and its evolutions are just as predictable as their water counterparts, and can primarily be found in grassy areas. That includes the obvious like farms and forests, but if you’re in a more residential or built-up area don’t forget the smaller and less-obvious options – parks are a good option, as are gardens, golf courses and so on.

There’s 14 grass-type Pokemon in the original 151 Pokemon that feature in Pokemon Go. These are Bulbasaur, Ivysaur, Venusaur, Oddish, Gloom, Vileplume, Bellsprout, Weepinbell, Victreebell, Exeggcute, Exeggutor, Tangela, Paras and Parasect. Some can only be obtained via evolving.

Gyarados is a major flying and water attacker!

Gyarados remains one of the giants in Pokemon Go! Usually this Dual Type Flying and Water Type are blue, but I was lucky enough to catch and evolve a shiny Gyarados! Read on to discover more about the Atrocious Pokemon from the Kanto region!

What Gyarados Excels In

How to get Gyarados

Pokemon Go: How To Find Specific Pokemon Types In The Wild

A Pokemon’s types determine not only its move set, but its natural habitat. Its habitat will in turn determine where in the world this Pokemon lives – and thus where you can catch it.

Behind-the-scenes, Pokemon Go is splitting the map of the real world into ‘Biomes’. A biome tells the game what’s in a particular area. Examples of Biomes behind-the-scenes are Building, Place of Interest, Roads, Park and so on. From this, we can determine what Pokemon will appear wher. So if you’re looking for a particular Pokemon just look for its type or name on this page and read our advice.

Either scroll on down, or . 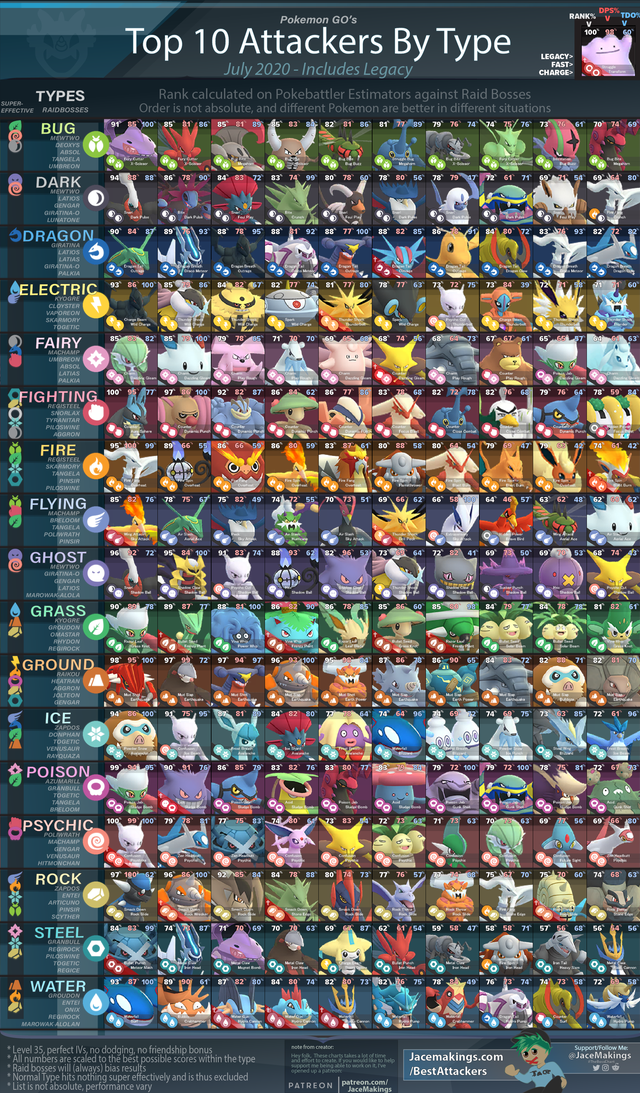 A cute but fearsome opponent in trainer battles!

Last and lasting, Vaporeon remains my go-to Pokemon for capture and battle. My Pokemon Buddy, named Blue, is a Vaporeon, and we battled together 26 times and traveled 413.30 km together: that is over 256 miles! Read on to learn more about the Bubble Jet Pokemon!

What Vaporean Excels In

How to get Vaporean

The Best Attackers In Pokmon Go

Over the last five years the experience of Pokémon GO has only gotten more and more complex, making choosing the best Pokémon that much harder in every battle. Whether youre looking to take on a boss in a raid or fight other trainers in the GO Battle League PvP arena, you often need to know who will deal the most damage. Of course, since there are so many types of characters, you need to filter it down somewhat. To help, heres the best Pokémon by type in Pokémon GO.

While the below Pokemon are all solid choices, the basics still remain: Youll need to make sure your Pokemon has decent Attack, Defense, and Stamina IV stats by getting it appraised. Make sure to also spend time powering it up for maximum potential before letting it loose on the world.

Here are our picks of the best based on everything from stats, max CP potential, weaknesses, our own experiences with the game, and how well theyll actually perform in battle.

How To Catch Fairy Pokemon In Pokemon Go

There’s just 5 fairy-type Pokemon in the original 151 Pokemon that feature in Pokemon Go. They’re Clefairy, Clefable, Jigglypuff, Wigglytuff and the ever-off-putting Mr. Mime. Don’t forget that Clefable and Wigglytuff can be obtained via evolution.

Clefable, also known as the Fairy Pokemon, tops off this grouping of excellent pocket monsters! This one remains one of the first Pokemon I captured in 2016. Nostalgia aside, this Gen I Pokemon from the Kanto region offers a lot in capture and battle!

What Clefable Excels In

How to get Clefable

How To Catch Ground Pokemon In Pokemon Go

Ground-type Pokemon like Sandshrew and Diglett can be found anywhere that fits their type – muddy locations like ditches and streams, parking garages, playgrounds, railway stations, roads and generally urban areas.

There’s 14 ground-type Pokemon in the original 151 Pokemon that feature in Pokemon Go. These include Sandshrew, Sandslash, Diglett, Dugtrio, Geodude, Graveler, Golem, Onyx, Cubone, Marowak, Rhyhorn, Rhydon, Nidoqueen and Nidoking. Remember that some of these are obtained via evolution and may not be found in the wild!

Strong as a bull!

Also known as the Wild Bull Pokemon, Tauros gallops from the Kanto region and is always ready for battle! Tauros is among my favorite Pokemon to battle in and leave at Gyms. Read on to find out more about this ferocious pocket monster!

What Tauros Excels In

How to get Tauros 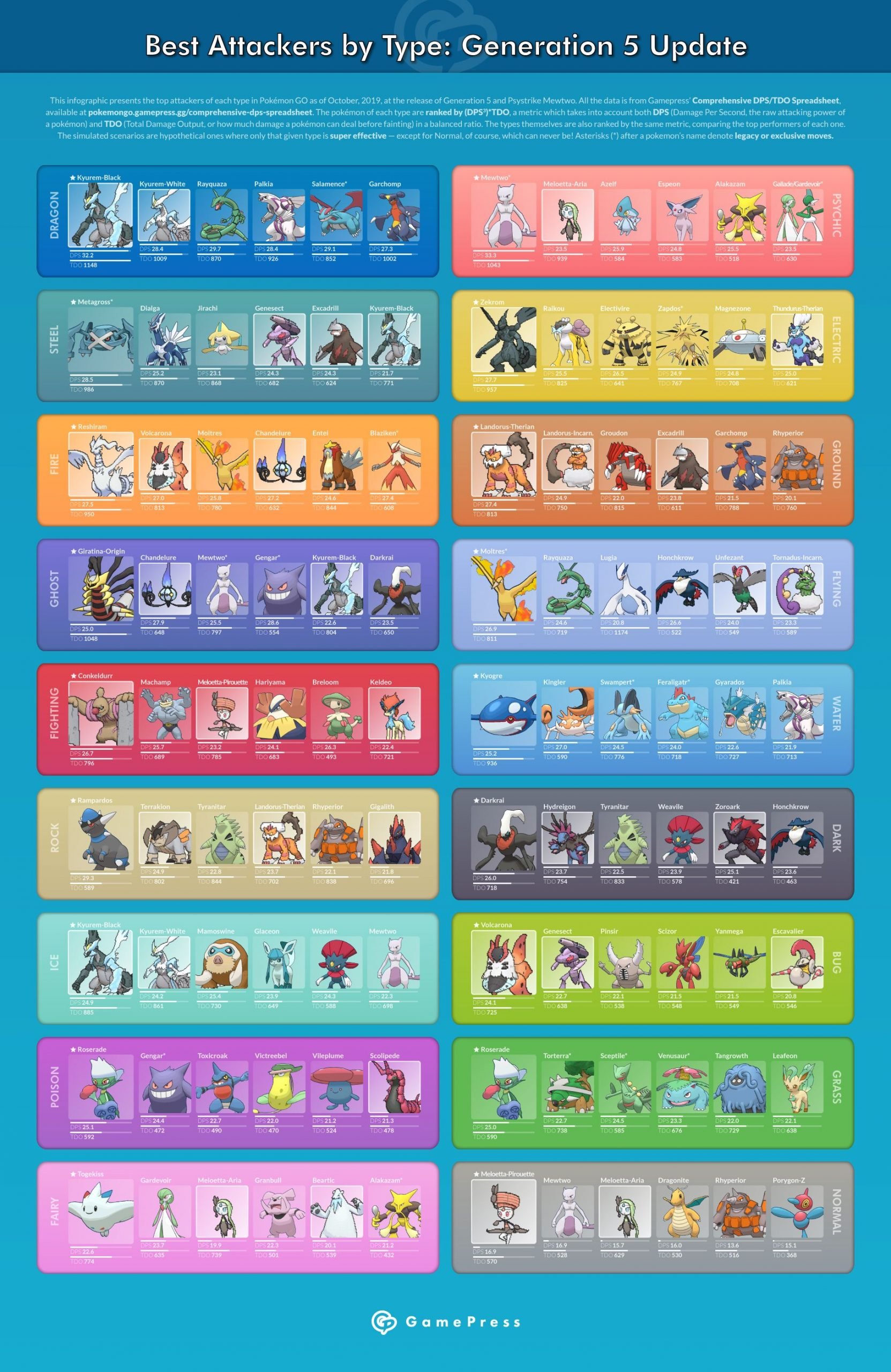 A Pokemon with a tough shell!

Cloyster, known as the Bivalve Pokemon, resides from the seas of the Kanto Generation. This Generation I pocket monster evolves from Shellder both Pokemon are fun to catch and use in battle! Read on to find out more about the Cloyster family!

What Cloyster Excels In

How to get Cloyster

Overall, Bug isn’t the best type. Sure, it has its uses, especially in terms of taking down Psychic- and Dark-types from time to time, but both of those types have other weaknesses that are home to Pokemon that are much stronger. With that said, Bug-types can find some niche use here and there.

Mega Beedrill is far and away the best Bug-type, without question. However, even with its best Bug-type moveset of Bug Bite and X-Scissor, its DPS still falls behind. With a monster max Attack stat of 303, though, it’s worth paying attention to, especially with its low evolution cost from Weedle and Kakuna.

For the rest of the ranking, you’re looking at the same familiar faces that dominate the Bug-type in the main series. There are no surprises here, to be sure. Pinsir and Scizor both do very well, whether in their boosted Shadow forms or just the vanilla forms. When their Mega Evolutions are released, they’ll be pretty great, though they may not take down Mega Beedrill.

Genesect has a fun gimmick with its different Drives, but sadly none of them add much value. It’s best as a Bug- or Steel-type, with the moves to match. The different Techno Blast types can have their use in the PvP meta, but they aren’t that great in PvE. As far as Bug-types go, if you’re looking for something that isn’t Shadow or Mega Evolved, Genesect is the best.

Since the very beginning the Pokémon series has depended on a delicate Rock-Paper-Scissors-style balance to its Pokémon battles. Type effectiveness is a key part of building an effective team in Pokémon GO or Pokémon Brilliant Diamond and Shining Pearl, or Pokémon Sword and Shield or any of the other Pokémon games. Once you know the basic strengths and weaknesses of the different types, you’ll easily triumph against any Pokémon type you come across in battle.

Every Pokémon belongs to at least one Type and will be strong or weak against other types. Some are pretty obvious – it’s no surprise that Water-type Pokémon will be strong against Fire types, but new players coming to Brilliant Diamond and Shining Pearl may have trouble committing the strengths and weaknesses of the 18 main types to memory. Therefore, we’ve produced the following Pokémon type chart to help you quickly suss out what’s what when it comes to Pokémon battles.

How To Catch Flying Pokemon In Pokemon Go

Flying-type Pokemon are typically a sub-type and have another type attached to them first , but their flying attribute still impacts where in the wild they’re found. Flying types are quite common, and can be found on farmland, forests, woods and grassy areas such as nature reserves, playgrounds, parks and gardens.

There’s 19 flying-type Pokemon in the 151 that are in Pokemon Go: Charizard, Pidgey, Pidgeotto, Pidgeot, Spearow, Fearow, Farfetch’d, Doduo, Dodrio, Butterfree, Zubat, Golbat, Scyther, Aerodactyl, Gyarados, Dragonite and the three legendary birds Articuno, Zapdos and Moltres. How the legendary birds are caught is unclear, and some of these can be caught via evolution.

This seahorse Pokemon is at home in the water!

Seadra, known as the Dragon Pokemon, derived from the Kanto region along with its unevolved counterpart, Horsea, and the Final Evolution Pokemon, Kingdra. As a Gen II Pokemon, Kingdra lived in the Johto region. Read more to find out more about the Seadra family!

How To Catch Normal Pokemon In Pokemon Go

Normal Pokemon are your run-of-the-mill beasts, and as such they tend to appear more or less everywhere. This is the easiest type to write about – no matter where you are, Ratattas and the like will always be fairly commonly and freely available to you. Even in your house, Normal-type Pokemon should be fairly freely available.

This star Pokemon is best when fighting in the rain!

Starmie, known as the Mysterious Pokemon, hails from the Kanto region. This Dual Type Water and Psychic Pokemon, along with Staryu, the unevolved version, are fun to find and fun to battle. Read on to find out more about this gem of a pocket monster!

What Starmie Excels In

How to get Starmie