First 4 Figures has brought us some stunning albeit expensive figures over the years. It has covered Nintendo quite a few times, ranging across Super Mario, Metroid and The Legend of Zelda, but until now, Pokémon had never been part of its line-up. Until now but sadly, it’s too late to get excited about that prospect.

For their first venture, First 4 Figures has brought us a “Charizard Rising Flames Figure”, coming in at 12 inches tall and it also lights up. Honouring Pokémon’s 25th anniversary, this was exclusively distributed via the Pokémon Centers North American websites, with only 3,500 being produced.

Like most of First 4 Figures’ line-up, it also comes with a hefty price tag, retailing at $249.99 / $324.99 CAD. Pre-orders were due to end on March 28th and, despite limiting purchases to one per customer, this new figure sold out immediately.

Considering Pokémon’s popularity and the limited stock, we’re hardly surprised by this, and scalpers have wasted no time putting them on eBay. It’s disappointing for fans and we don’t know whether Charizard will get a restock but, as a small silver lining, those quick sales bode well for further figures.

Is there a particular Pokemon you’d like First 4 Figures to choose next? Tell us in the comments below.

If you live with someone who says Pika far too much, then you definitely need this list of the best Pokemon toys of 2021!

No matter what occasion youre looking to buy presents for, this Poke-licious gifts are perfect for the ultimate Nintendoids in your life.

From gadgets that get them outside to figurines that will supercharge their imagination, weve compiled a list of the 20 best Pokemon toys on the market that will make someones day a heck of a lot brighter

So, lets stop the waffling and crack on with the list!

First up on our list of the best Pokemon toys is the ultimate way to play Pokemon Go or either of the Pokemon Lets Go games for the Nintendo Switch the Pokeball Plus!

Instead of wielding a Joycon or swiping your finger on your smartphone, players can now hold a Pokeball for catching pocket monsters, just like in the games and TV show.

Complete with a joystick form moving your character around the screen and choosing actions, the Pokeball Plus givers every gamer the chance to have the ultimate Pokemon trainer experience!

Pokemon Celebrations is by far the best Pokemon TCG set to come out in years. Its a mix of new and old cars the celebrate the last 25 years of Pokemon.

I have been collecting these ever since it release in October 2021, and I cant get enough of it. THeres some classic EX cards, shiny cards, a gold Mew and the three original starter Pokemon to find.

Its a poke-maniacs dream come true!

First 4 Figures has revealed a new statue for Sonic The Hedgehogs 30th anniversary.

The Sonic The Hedgehog 30th Anniversary statue is based on the anniversarys key artwork, featuring Sonic running ahead of a giant golden ring. It is available in three editions: Standard, Exclusive, and Definitive. The Exclusive edition adds an extra hand part with Sonic making a V sign, while the Definite edition includes an LED effect part for the ring featuring several of the games iconic levels. It is currently up for early bird pre-order on First 4 Figures website, with the main pre-orders opening on 22nd April.

Check out the trailer below for more details:

During the recent Sonic Central presentation, SEGA revealed two new Sonic The Hedgehog statues in the works at First 4 Figures.

The new figures are resin statues of Amy Rose and Tails, both of whom have been largely absent from First 4 Figures lineup, which mostly focuses on Sonic himself as well as fan-favorite Shadow. At the time of this writing, further information such as the price or release date were not revealed, but we did get a set of prototype images as follows: 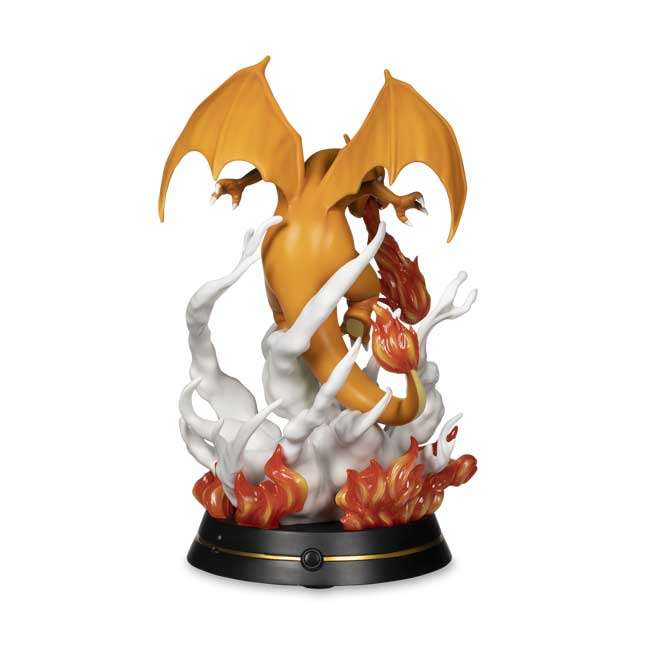 Previously, we reported that Sprigatito, Fuecoco, and Quaxly, the new starters from Pokémon Scarlet and Pokémon Violet, would all be receiving official plushes sometime this year. While the details as to when and where the plushes would be released were unknown, The Pokémon Company has now provided almost all the

A wild Charizard has appeared from First 4 Figures?!

We were promised to see some exciting products released this year in honor of Pokémons 25th anniversary, and thats definitely being delivered today. First 4 Figures announced on their website and social media channels that theyve made an exclusive figure for Pokémon Center and it stars Charizard. The Charizard Rising Flames figure is a 12 inches tall and lights up! According to the , the statue was made exclusively for Pokémon Centers North American sites and is limited to 3,500 pieces.

The statue does come with a bit of a price tag though. With a purchase limit of one per customer, the statue will run you $249.99 / $324.99 CAD. If you want to secure one of these gorgeous statues, the Charizard Rising Flames Figure by First 4 Figures will be available to pre-order today at Pokémon Centers US and Canadian sites only. Pre-orders will end on March 28th or when the entire 3,500 piece run sells out whichever happens first.

Don’t Miss: How Many Episodes Of Pokemon Are There

First 4 Figures has revealed its first ever resin statue based on the Pokemon license: Charizard Rising Flames! The statue features the Pokemon flying above smoke and flames while using its powerful Flamethrower attack. An LED allows Charizard’s flames to light-up, which is powered by USB. The statue measures in at about 12 inches tall with an 8.5-inch base. The statue is only available through Pokemon Center, and costs $249.99. Unfortunately, pre-orders seemed to quickly sell out for the item, and it’s not hard to see why: like so many other Pokemon collectibles of late they’re already going for hundreds more than asking price on eBay!

An image of the statue can be found in the Tweet embedded below.

First 4 Figures is proud to introduce our first Pokémon resin statue ever: Charizard Rising Flames! Made exclusively for the Pokémon Center website in the US and Canada, pre-orders are now open!

According to the for First 4 Figures, pre-orders for the statue will be “open through March 28th or while supplies last.” However, , the company apparently stated in an earlier Instagram post that the statue would be limited to 3,500 pieces. The current Instagram post does not list that number, so it’s impossible to say whether or not there was a change due to demand, or if that number was a mistake in the first place. Given how many resellers seemed to scoop them up, hopefully more will be made to meet fan demand!

Available as a standard edition or a super fancy Exclusive edition that includes LED lights, the figure has entered its ‘last chance to pre-order’ stage on First 4 Figures’ website. The standard model costs US$533.99, with the Exclusive model setting you back US$587.99.

The figure shows Samus in her Varia Suit as it was seen in Metroid Prime 2: Echoes:

First 4 Figures is proud to showcase Samus in the Varia Suit. Instantly recognisable from games as far back as the original Metroid game on the NES, the Varia Suit has remained a series mainstay, and is here depicted as it was seen during Metroid Prime 2: Echoes. Captured in a stunning ¼ scale in hand painted polystone, Samus measures an awesome 20 inches tall, standing upon a base inspired by the series insignia.

It’s actually the second in the company’s series of Metroid Master Arts statues a few years ago, fans were also treated to an equally delicious Light Suit variant.

Watching that unboxing video, we were already getting excited just seeing that Metroid logo base. It’s not easy to justify spending that kind of cash, but these figures sure are wonderful.

Please note that some external links on this page are affiliate links, which means if you click them and make a purchase we may receive a small percentage of the sale. Please read our FTC Disclosure for more information.

You May Like: How Much Is Pokemon Card Worth

A web-slinging adventure awaits in Webbed! Released on the Nintendo Switch earlier this year via the Nintendo eShop, Super Rare Games has announced today that theyve partnered with Sbug Games to bring this adorable 2D platformer into a limited physical edition. A story about a happy little spider who

Although the Charizard figure is produced by First 4 Figures it is currently a Pokemon Center exclusive, and can be pre-ordered for 249.99 USD . The figure will ship in November of 2021, making it a great holiday-season present for yourself in the future. Sadly, its currently exclusive for the US and Canda regions.

All in all the statue sports a pretty cool design, with Charizards flying pose being supported by the pillars of smoke. The flames are transparent, and can be lit up via USB connection to make for a great light display. Even the fireball leaving Charizards mouth lights up, which should make it fun to display in your room.

Its also pretty on-model for a Charizard, looking straight out of the Pokemon anime. Unfortunately, unlike their other statues like the Blue Eyes White Dragon, Charizard doesnt come with any optional parts to swap out between.

The Pokemon Company clearly expects this to be a big hit, since the Pokemon Center website has the pre-orders limited to one per address, in a bid to prevent scalping.

Where To Sell Pokemon Cards For Cash