Which Pokemon Type Are You

Legendary Pokemon cannot be recruited in Rescue Team DX until after the credits roll. After completing the main campaign, you can head back and challenge any of the legendary Pokemon you faced during the story and rematch them, only this time theyre opened up for recruitment.

These story-related legendary Pokemon, including Zapdos, Articuno, Moltres, Groudon, and Rayquaza, will be automatically recruited after defeating them a second time in the postgame.

How To Recruit Legendary Pokemon In Pokemon Mystery Dungeon Dx

Once you have completed the game, you will unlock the Dungeons which contain the Legendary Pokemon to play through again, according to Serebii.net. Youll need to return to the dungeons housing the Legendary Pokemon and battle them again to recruit them upon defeating them. You can do this with the following Pokemon:


For Legendary Pokemon that dont appear in the main story, however, youll simply need to defeat them or reach the end of their corresponding Dungeons twice to recruit them. This should be the recruitment method that works when it comes to most of the 15 post-game Legendary Pokemon in Mystery Dungeon DX . Make sure you have bought all the correct Camps from Wigglytuff to ensure you recruit the Legendary Pokemon.

Some Legendary Pokemon, however, will be recruited to your Rescue Team the first time you defeat them. Equip the Friend Bow to help make sure this happens. This should be the case for the following:

Both Time and Darkness flow through the same vein, the only difference being the Pokémon players have access to. Once players have completed the personality test and been placed in their own body, a partner Pokémon will soon enter into the game.

It’s now the responsibility of the player to keep both characters alive through the dungeon adventures. Losing the partner will have an equally big impact on the team and is something to avoid at all costs, furthering the collaborative flow of the series.

How To Pick Starters

As the game begins for the first time, you’ll be given a personality test to determine which Pokemon is right for you, giving you eight hypothetical questions and deciding what kind of person/Pokemon you are as a result. Don’t worry if you don’t like the final result, as the game allows you to choose for yourself after revealing its own suggestion. Still, you need to be very sure that you won’t both these two Pokemon – they’ll be your team for the majority of the game.

The primaryaim of using a Food item in Pokémon Mystery Dungeon: Rescue Team DX is to restoreor increase your Belly metre fully.

To use aFood item, all you have to do is access your Toolbox and select the item thatyou want a Pokémon to eat. You can also give a Pokémon some food to hold, whichthey will use if necessary.

How To Recruit Shiny Pokemon

There are a few things you can do to give yourself as high a chance as possible to catch Shiny Pokemon. The first two come from Rare Qualities. The qualities Friendly and Squad Up both give you a higher chance of recruiting Pokemon. Friendly always applies, but Squad Up increases the chances depending on how many Pokemon you have with you in the Dungeon. Weve got a full list of Rare Qualities in Mystery Dungeon DX should you need it.

The Friend Bow is a very important item to have when trying to get Shiny Pokemon. Itll increase the chance of recruiting both normal and Shiny Pokemon and all you need to do is make sure your leader has it equipped. We also have a page on where to find the Friend Bow which you’ll defintiely find helpful.

The TM False Swipe will also be helpful in recruiting Pokemon. This move will increase the chances of recruiting Pokemon if this is the move used to knock them out. Giving this to your leader will be a big help. Sadly this isn’t one of the TMs you can get for free through the use of a Wonder Mail Code, but several other useful TMs can be gained that way.


Basically, if youre a Pokemon wearing a Friend Bow, with the Rare Quality Friendly, whilst also making sure to use the False Swipe TM, youre going to have the absolute best chance at recruiting any Shiny Pokemon you come across.

To use a berry,all you have to do is access your Toolbox and select the berry that you want aPokémon to eat. You can also give a Pokémon a berry to hold, which they willuse if necessary.

Which Pokmon Can Be Shiny

Not every Pokémon in Mystery Dungeon DX has the potential to be Shiny in fact, only 27 of the games 418 Pokémon species can be encountered or recruited as Shinies. These will tend to show up as Strong Foes in dungeons, with each of these species having a specific dungeon where it can appear. However, not all Strong Foes will be shiny, so you may need to retry a dungeon several times to get one to appear. The Strong Foes that can appear in any particular dungeon will be shown on the map screen before you choose which dungeon to visit, so youll be able to prepare ahead of time for the Pokémon youll be facing ! Strong Foes are encountered like any other ordinary enemy within the dungeon, but are specially marked on the dungeon map with a yellow triangle symbol and of course, theyre much more powerful than other wild Pokémon in the area.

If you head down the southern path of Pokémon Square, youll find Makuhitas Dojo. While you can do the very useful Tricks of the Trade tasks for free, youll need a Dojo Ticket to run through any of the Exp-earning training sessions known as Dojo Drills.

To use aDojo Ticket in Rescue Team DX, go to Makuhita outside of Makuhitas Dojo andgive them the ticket that you want to use.

After obtaining the necessary Rescue Team Camps and equipping your Friend Bow, you should be ready to hunt for Shiny Pokémon! There are still quite a few things to keep in mind as you attempt the dungeon of your choice: first of all, remember that you need to be the one who knocks out the Strong Foe, or you wont be able to recruit it! While you can switch which character youre controlling at any time, youll need to make sure the Friend Bow is attached to the Pokémon you want to use the finishing blow, and that youre controlling the Pokémon as it does so. If youre worried about your allies knocking out the Strong Foe and wasting your recruitment chance, you can use the Tactics feature to stop them from attacking once you encounter the Strong Foe. Temporary allies, on the other hand, wont listen to Tactics orders, so its usually best to avoid bringing these along. Its often easiest to make sure youre playing as the strongest team member, or one that the Strong Foe is weak to, to ensure the fight goes smoothly. Even if you dont manage to recruit a Strong Foe, youll obtain some loot from the Treasure Box it drops upon defeat, so this method is also a good way to farm rare items. Additionally, several Strong Foes can appear during the same expedition so its best to keep going even if you dont recruit the first one you encounter. 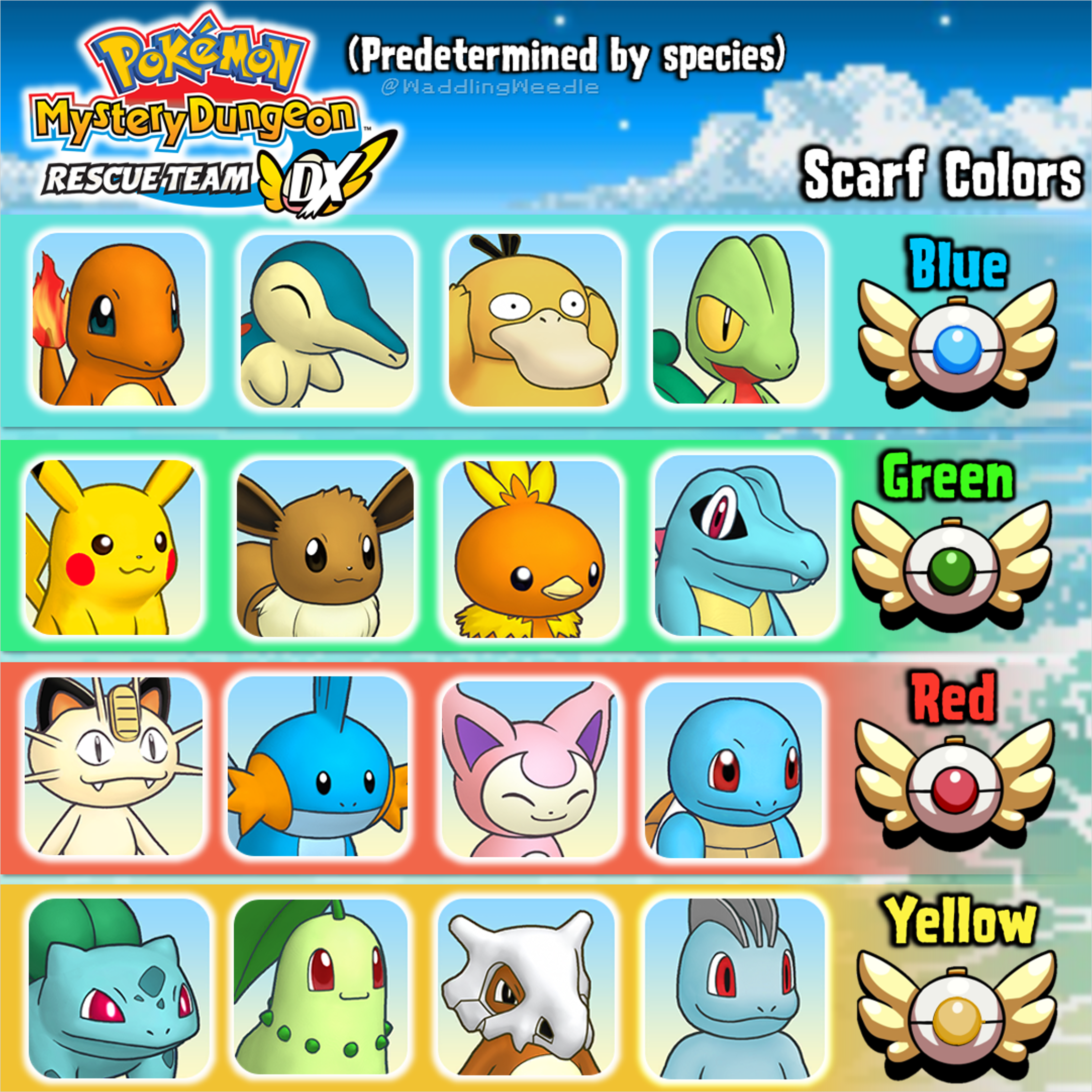 What starter Pokemon are the best? Find out which ones you should be using here!

In the past where you would be stuck with whatever Pokemon your personality best suited with now you can really pick the best starter team possible.

This has opened up the door for more Pokemon combinations as players can dictate what Pokemon they want to make up their team of two.

So, let’s go over with the best combinations you can use along with the overall best Pokemon!

Be sure to watch our wide variety of Pokemon content here!

In Pokémon Mystery Dungeon Rescue Team DX, there are 16 possible Pokémon you can play as.

Since the original games, Pokémon Mystery Dungeon: Red Rescue Team and Blue Rescue Team, were released during the Gen 3 era , the choice of playable Pokémon is limited to the first three generations.

The Pokémon you play as is determined by the results of the personality quiz you take at the start of the game. Each question you answer helps assign you a Pokémon nature, such as Brave or Impish, expect for the final question, which asks whether you want to play as a boy or a girl. Both the Pokémon nature you’re assigned and your chosen gender determine which Pokémon you’ll play as.

Due to the fact that there are 13 Pokémon natures but 16 playable Pokémon, three Pokémon will be removed from the option pool depending on which gender you pick.

Below is every playable Pokémon in Pokémon Mystery Dungeon Rescue Team DX, including both the personality result and gender you need to have to play as them:

Once you’ve been assigned your Pokémon, you can pick a Partner Pokémon. This Pokémon will stay with you for the entirety of the game and help you survive in the Pokémon world!

Check out the list below for each dungeon youll find Strong Foes in:

Like theGummi items, vitamins can be used to boost a set stat or move aspectpermanently. The other vitamins, the elixir and ether items, are used torestore PP while youre exploring dungeons.

Vitaminitems can be consumed while in a Rescue Team Camp . Select the option Get Stronger and then the item ofchoice.

How To Recruit All Other Legendary Pokmon

Aside from the story-related Legends, 15 other Legendary Pokémon are available as part of Rescue Team DX post-game content. The same rule applies to these Legendaries: they cannot be recruited during the first encounter. You have to defeat them once, then come back and fight them a second time to recruit them into your rescue team. Plus, like other Legendaries, recruiting is automatic after the second encounter, so you won’t have to worry about luck.

These are all the post-match Legendary Pokémon in Pokemon Mystery Dungeon: Rescue Team DX and where to find them.

Each of these Legendaries are set in incredibly difficult post-match dungeons, most of which are tied to post-match quests. Make sure you stock up on useful items and recruit powerful Pokémon for a chance.

You May Like: What To Use Master Ball On Let’s Go

When players enter a dungeon it will be randomly generated and includes various types of pokemon, traps and even weather. In particular, the weather will have a big range of effects, some boost a type of pokemon others will make it impossible to use items.

How To Recruit Every Other Legendary Pokemon

Outside of story-related legendaries, there are 15 other legendary Pokemon available as a part of Rescue Team DXs postgame content. The same rule applies with these legendaries: they arent able to be recruited during the first encounter. You have to defeat them once and then return and battle them a second time to recruit them to your Rescue Team. Also, like the other legendaries, recruitment is automatic after the second encounter, so you wont have to worry about getting lucky.

These are all the postgame legendary Pokemon in Pokemon Mystery Dungeon: Rescue Team DX and where to find them.

You May Like: New Eevee Evolutions Sun And Moon