In order to access the Team Snagem Hideout, you need to finish the main game first. Then, head to Pyrite Town and head to the bookshelf where theres a secret passage. Talk to anyone of the kids and head to the entrance of Pyrite Town where Cail is hanging. Battle Cail and beat him where he will then give you a map. The map will show you where Team Snagems Hideout is where there are lots of trainers to do battle.

Finish the game first and go to the Deep Colosseum. Youll find a Silver Teeth item which you need to give to the old man located at the Herb Shop. The old man will give you the UFO Disk-L which will enable you to obtain the Amulet Coin. The Amulet Coin gives you more money after each battle when equipped on a Pokemon.

Great game, would recommend to any Pokemon fans with a Gamecube. In the game, you get a lot of the more rare Pokemon that you might not have on the handheld games, which is nice! Completing the game and purifying all of the shadow pokemon will give you more than 100 hours of gameplay, so it is well worth it! 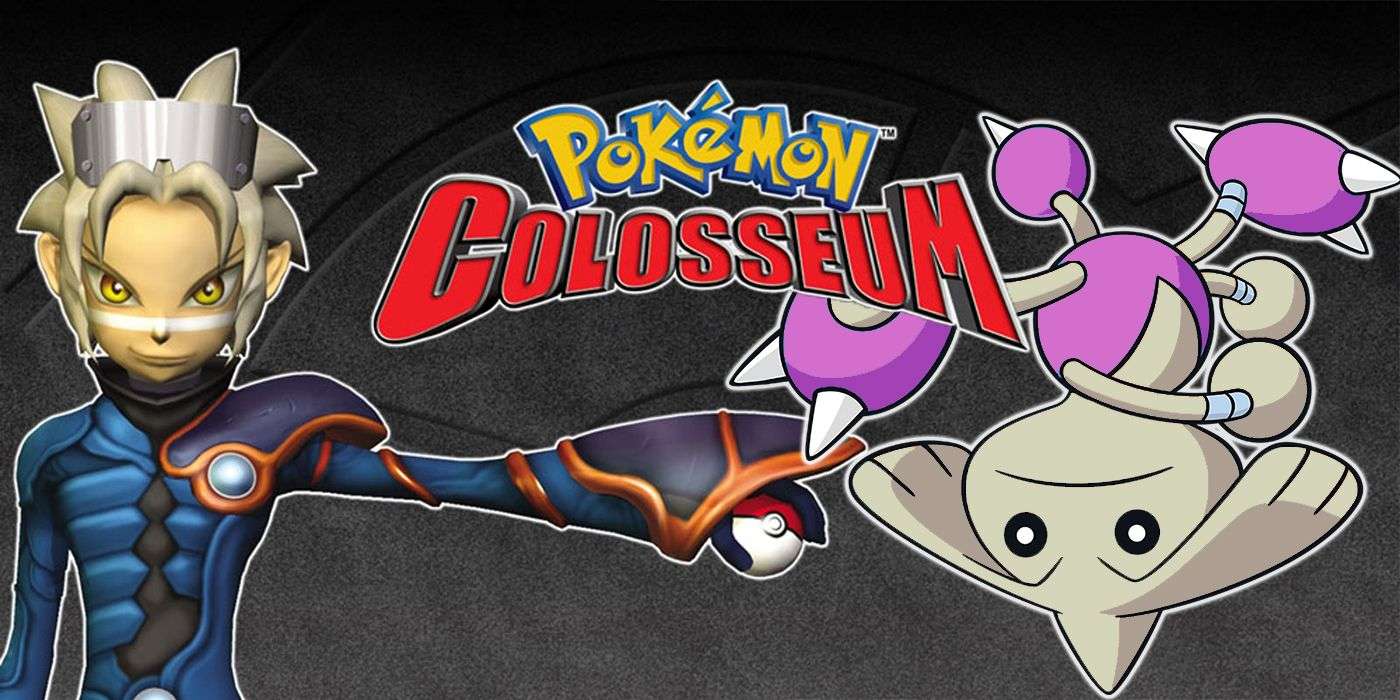 Pokemon Colosseum is a spin-off game released in 2004 internationally for the Nintendo Gamecube. The game uses RPG elements where you have to explore the Region of Orre and progress the story.

In terms of gameplay, it is still similar to the main games where it is turn-based and you command your Pokemon to use moves and win the fight. A great difference is that in this game, there are no random encounters.

You fight trainers and catch their Pokemon. Thats right, instead of getting Pokemon in the wild, you steal or Snag the enemy trainers Pokemon. However, were not going into full detail about the game because this is our Pokemon Colosseum cheats, hints, tips, and tricks list. Well add instructions and whatever things you need to do to use these cheats.

How Many Pokmon Can You Snag In Pokmon Colosseum

Colosseum placed numerous caveats and restrictions on the traditional Pokémon adventure it wasnt truly open-world, instead letting you explore different locations through a quick travel menu the catch em all mantra was limited to 48 shadow pokémon, there was no wild pokémon, and youre locked into double battles

Unlimited Master Ball Or Any Ball

One thing to note that this glitch may not work all the time. It usually depends on the version of the game or if you did it correctly. This glitch can also be used when you dont have a Master Ball yet. What you do is change the Master Ball into any Ball. It could be an Ultra Ball or Nest Ball but have the result is that youll be using the Poke Ball and not use up the others.

The Time Flutes are valuable items in the game because they Purify your Pokemon right away. There are only three of them that you can get so choose wisely which Pokemon you will use them on. People recommend using the Time Flutes on the Legendary Dogs Suicune, Entei, and Raikou but it is up to you. This is definitely one of the most useful Pokemon Colosseum cheats or hints that you can use.

Shadow Pokémon are finally here, but which ones can you currently catch?

Below you’ll find a list of all the currently available Shadow Pokémon in Pokémon Go. We’ve also included the counters to help you defeat each Shadow Pokémon and the Team Go Rocket phrases, which hint at what Shadow Pokémon you’ll be facing.

Recommended Reading: How To Get Mewtwo In Pokemon Go

This is a list of all Pokémon which were made into Shadow Pokémon by Cipher in Pokémon Colosseum and Pokémon XD: Gale of Darkness. There are 131 different Pokémon on this list.

In Pokémon XD, any Shadow Pokémon that was defeated without being snagged and whose Trainer cannot be rebattled can be encountered again by battling Miror B. at the Pyrite Colosseum or the Realgam Colosseum or at Poké Spots. When Miror B. randomly appears in one of these places, he will have a random missed Shadow Pokémon on his team. The Miror Radar will alert the player when Miror B. makes an appearance.

Many Shadow Pokémon have a different catch rate to their species’ usual rate, usually making them easier to catch than a normal Pokémon of that species.

Shadow Pokémon, and Team Go Rocket, can now be found in Pokémon Go.

Originating from the Gamecube spin-off games – Pokémon Colosseum and Pokémon XD: Gale of Darkness – Shadow Pokémon have had their hearts corrupted by evil. It’s your job to rescue and then purify these Pokémon, making them far stronger in the process.

You can catch Shadow Pokémon by defeating Team Go Rocket at the PokéStops they have invaded, so keep an eye out for any suspicious looking PokéStops!

Update : Shadow Pokémon have seen a few nerfs since release – specifically lowering their capture rate, and no longer becoming tradable .

On Sunday, 3rd April, the following Shadow Pokémon were released into Pokémon Go:

On 24th January, 2022, the following Shadow Pokémon were introduced into Pokémon Go:

On May, 18th, 2021, the following Shadow Pokémon were introduced as part of the Luminous Legends Y event:

On April, 1st, 2021, the Shadow versions of Aipom and, in turn, Ambipom were introduced.

On February, 2nd, 2021, the following Shadow Pokémon were introduced:

On December, 10th 2020, the following Shadow Pokémon were introduced:

On October, 12th 2020, the following Shadow Pokémon were introduced:

As part of Rocket Straight to Victory research quest, part of the Pokémon Go Fest 2020 celebrations on the July, 26th 2020, the following Shadow Pokémon were released:

On July, 10th 2020, the following Shadow Pokémon were introduced alongside the first appearance of Jessie and James in Pokémon Go:

On February 4th 2020, the following Shadow Pokémon were introduced:

On November 7th 2019, the following Shadow Pokémon were introduced to the game: 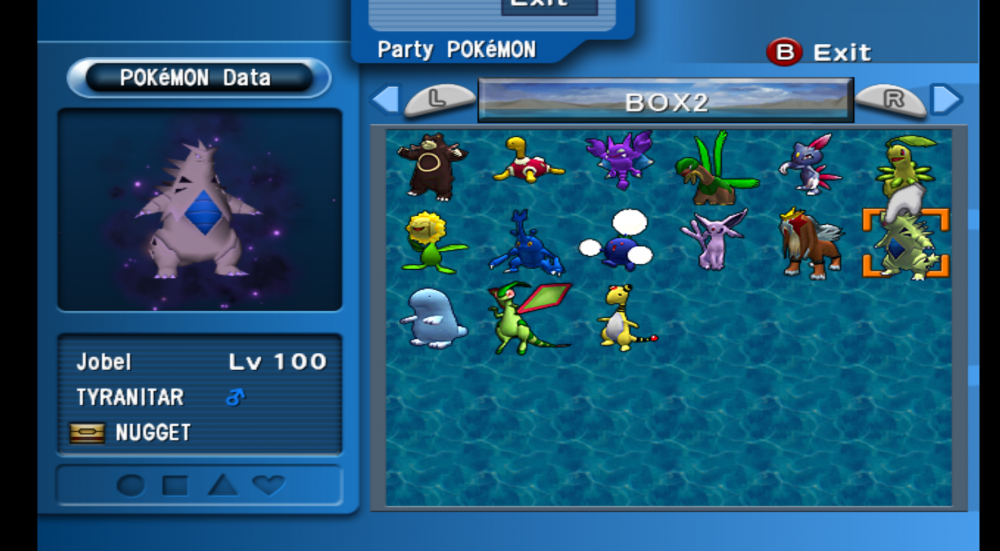 Shadow type in Colosseum acts as a neutral attacking type. It can hit all Pokémon in the game for neutral damage. The only Shadow move in Colosseum is Shadow Rush. Shadow Rush is a 90-Base Power physical move and the user suffers 1/16 of its maximum health as recoil damage. This also applies to NPCs using Shadow Pokémon, and thus these Pokémon have the potential to faint.

In XD, Shadow moves gain an extensive overhaul. There are now various Shadow-type moves that deal status effects, and certain Shadow moves will hit based on either Attack or Special Attack. XD actually makes the first instance of a physical/special split in the Pokémon games, and this is only apparent with Shadow moves. All other moves are physical or special based on their typing, as the standard games. What makes Shadow-types unique is that Shadow moves deal super-effective damage to all standard Pokémon while being not very effective against Shadow Pokémon. There are a total of 18 Shadow moves in XD.

Keep in mind that no Pokémon gain STAB with Shadow moves, as the Shadow-type is only available through moves, similar to Curse’s pre-Gen 5 typing.

As Pokemon GO possibly prepares for more Shadow Pokemon, the franchise should consider bringing them into the main games. With news about Gen 9 still quiet, there seems to be a lot of time to prepare. Fans are focused on Pokemon Brilliant Diamond and Shining Pearl as well as Pokemon Legends: Arceus, so revisiting Shadow Pokemon in a future core game could be a great way to show how the series wants to grow while reconnecting fans with older content.

The mechanics around Shadow Pokemon might not need to be revamped much either. The approach used in Pokemon GO could be implemented, as purifying Pokemon would likely relate to the love or friendship levels a player and their Pokemon have – systems already integral to evolving certain Pokemon. Stressing this relationship would also continue to reinforce the positive relationships that Pokemon and people are supposed to have.

Its a subject that is touched on time and time again, and even comes up in the lore for Hisuian Zorua and Zoroark. These two specific Pokemon highlight the tragedy of people and Pokemon not coexisting peacefully, and thus point to how important that peaceful existence is. A symbiotic relationship that benefits both parties is important, and while creating Shadow Pokemon throws this balance off, cleansing them and working against villains like Cipher from the Orre region reinforces the lesson.

Purified Pokémon have a number of perks that set them apart from other Pokémon, which include:

Thank you to ControvT from reddit for the help with this information.

Purified Pokémon will have a blue star next to them in your Pokémon storage.

Due to the Candy cost, it’s worth catching non-Shadow Pokémon as you play, so that you will be able to quickly purify Shadow Pokémon after you catch them. This will help you build up a strong collection of new Pokémon and level up your Purifier medal.

Below you’ll find a complete list of all the currently released Shadow Pokémon in Pokémon Go – it will help you plan out your new catching regime!

How To Defeat Shadow Snorlax In Pokmon Go

Turns out the only thing harder than waking Snorlax up is defeating a Shadow Snorlax in battle.

Currently, Shadow Snorlax is one of the hardest Shadow Pokémon available in Pokémon Go.

Thanks to the evil infecting Shadow Snorlax, it has the ability to use fast Ghost and Psychic type moves as well as charged Normal, Ground and Steel moves. This means that Shadow Snorlax can’t be defeated by the Pokémon, such as Machamp, that would easily knock out a Normal type Pokémon.

Here is a list of Pokémon, and the moves they can use, that would make an ideal team to take down a Shadow Snorlax or two:

If you’ve been lucky with the Legendaries, you could also call on them for help:

Don’t forget to use your shields to block any of Shadow Snorlax’s charged moves!

Thank you to celandro from reddit for the help with this information.

Can You Beat Pokemon Colosseum Without Catching Any Shadow Pokemon?

This a glitch that is tricky to execute but can be worth your while when you want to reduce the Heart Gauge of your Pokemon so follow these steps and a good addition to our Pokemon Colosseum cheats, hints, tips, and tricks list.

How To Purify Shadow Pokmon In Pokmon Go

Now that you’ve rescued a Shadow Pokémon from Team Go Rocket, it’s time to purify it.

Once you’ve picked a Shadow Pokémon, you’ll discover that there is a new option available above ‘Power Up’ and ‘Evolve’ – Purify.

Select ‘Purify’ and then ‘Yes’ on the confirmation window to watch a cutscene of your Pokémon being cleansed of the evil that has invaded its heart, leaving you with a newly purified Pokémon.