Niantic has announced that a Pokemon GO Bug Out event will be taking place in June 2020 to celebrate the debut of the Shiny Dwebble! Players that participate in this event will have a shot at catching a bunch of different Bug-type Pokemon, will be able to participate in event-exclusive Field Research tasks, and more. Here are some details on the Bug Out event in Pokemon GO, including the start date, catchable Pokemon, and more!

Update : Niantic, the developer of Pokemon Go, announced that Pinsir Raid Day has been canceled.

Trainers, two themed events are taking place in Pokemon Go this month. The Solstice Event will run from June 19 until June 24, and then just two days later, the Bug Out event will begin!

During this Bug Out event, youll earn two times the normal amount of experience points when capturing Pokemon. This bonus will count for every Pokemon that you capture, and not just Bug-type pocket monsters.

In case you arent hyped for the Pokemon GO Bug Out event yet, on Sunday, June 28 from 11 AM to 2 PM local type, players will have an increased chance at catching Pinsir via three-star raids. Further, during the allotted time frame, players can buy three Remote Raid Passes with 1 PokeCoin so that they dont have to leave the comfort of their own homes.

Having trouble with raids in Pokemon GO? Check out our video guide for some tips and tricks that should help make winning raids a whole lot easier:

While you wait for the Bug Out event to get started, we have plenty of other articles that will help you with the daunting task of catching them all! Youll find some of our recent coverage in the links below:

Also Check: What Legendary Pokemon Are In Sword

The solstice-themed event starts on Friday, June 19, at 8am and will end on Wednesday, June 24 at 10pm.


During the event, Pokémon associated with the sun and moon, such as Clefairy and Sunkern, will appear in the wild more frequently, hatch from 5 km eggs, and act as rewards for exclusive research.

As well, you will have an increased chance of finding a Shiny Clefariy, which has only been available via evolving a shiny Cleffa.

According to the Pokémon GO blog, Lunatone and Solrock will also be appearing in three-star raids and you have a chance of hatching them from 5km eggs too.

Usually, Solrock and Lunatone are locked to specific regions. But given this event is focusing on these two creatures, this will change as the event progresses.


The opposite will be true for Solrock, becoming available in the western hemisphere.

After that, the next two days of the event will have both Solrock and Lunatone appear more frequently across the globe.

As the event comes to an end, the respective Pokémon will return to their original region and remain there.

Pokemon Go Has Revealed That A New Event Featuring Bug 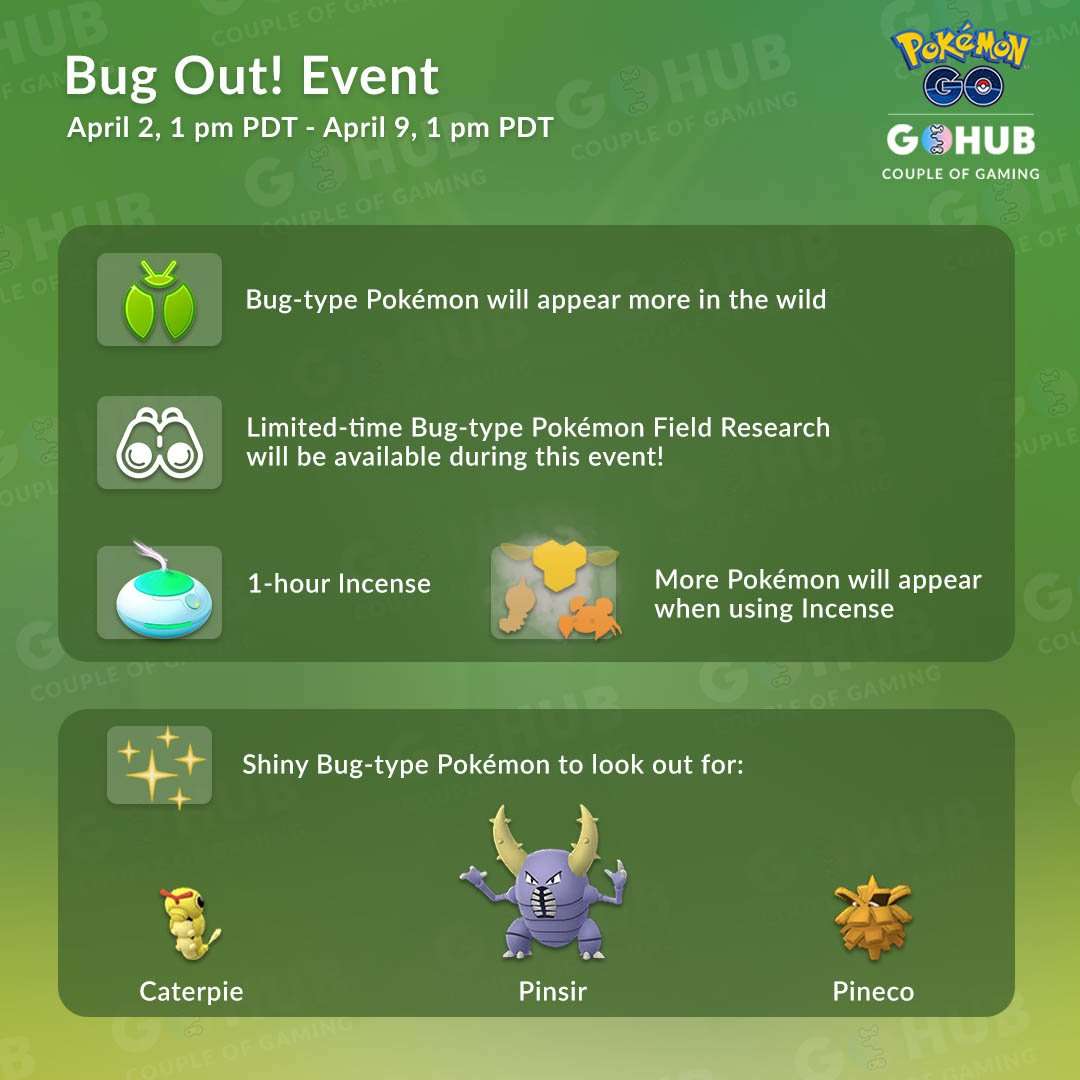 In addition to increased bug-type Pokemon spawns, this event will also feature bug-themed field research tasks. It looks like Niantic is also going to try a new bonus with this event which will buff incense. This week incense will last twice as long and spawn more Pokemon than usual. This will help players find all those bugs during the event.


While a bug-type event may seem odd, given how common bug Pokemon generally are, there are a few rare ones out there. Keep an eye out for Nincada, this little guy may make an appearance after being absurdly hard to find since its release. There is also a small possibility that Niantic will release Heracross to regions outside of just South America and Latin America.

Then there are Pokemon that have yet to be released from the Sinnoh region. There is Burmy, a bug-type Pokemon from generation four who evolves into Wormadam. Burmy and Wormadam have multiple different appearances, and it will be interesting to see if Pokemon GO uses this event as an opportunity to release this interesting Pokemon. They did not use the grass event to release Cherubi and Cherrim, however, so this may be unlikely.


Weve got our second big Pokémon GO event of June this week, closing out the month with a summery bug explosion. Its the second Bug Out, featuring a ton of bug-type Pokémon and all the usual suite of event changes: eggs, raids, and a new special shiny. Bugs might not get the most love out of all the types out there, but theyre always there, rounding out the basic creatures of each series and trucking along in their own lovable way. Lets get on to the details.

Spawns: Its a ton of bugs, as you might guess. Heres some of what were seeing out there:

Shiny Dwebble: Dwebble is charming little thing, and its evolution manages to keep its essential strangeness intact. Its also the highlit shiny Pokémon of this event. The color shift is very difficult to spot, but it becomes a lot easier once you evolve it to Crustle and it turns bright green. Heres what youre looking for, best to just check for the icon and move on:

Raids: Credit to the Silph Road for putting this one together. Heres who well see in raids during the event:

Pokemon GO Bug Out 2020 event starts June 26 and will feature increase rates for bug-type Pokemon in the wild, 5km eggs and raids.

Get your Incense ready âthe Bug Out! event is coming later this month! This will be the perfect opportunity for you to work on your Bug Catcher medal, and you might even catch a Shiny Dwebble.

We expect the following Pokémon to be spawning more frequently during the event:

Niantic has shared more information on two of this month’s Pokemon Go events, including what Pokemon and bonuses will be available during each.

Niantic has a ton of events lined up for Pokemon Go this month, including the returning solstice celebration–which is now underway until June 24–and the bug-themed Bug Out. The studio has now shared more details about both events, including what Pokemon and bonuses will be available during each.

During this event, Bug-type Pokemon appear more frequently in the wild. Incense will also last twice as long and more Pokemon will appear when using Incense.

The Bug Out event research tasks are a series of limited-time challenges in Pokémon Go that are themed around, you guessed it, Bug-type Pokémon.

These tasks can be found by spinning PokéStops, alongside the current roster of monthly Research Tasks, which are currently available.

If you’re looking for a specific task, then you might have to visit a number of different PokéStops before you get it!

This event also sees more Bug-types spawning the wild – including Venipede, Scyther, and the now shiny Dweeble – as well as Eggs and Raids.

‘pokmon Go’ Bug Out Event: Shiny Dwebble And Everything You Need To Know

The next in-game event in Pokémon Go spotlights the Bug-type Pokémon and gives trainers a chance at a debuting Shiny and much more.

We’ve compiled a list of all the pertinent information you’ll need for this week’s Pokémon Go Bug Out event, which you can read below.

The Bug Out event’s exclusive field research tasks won’t be revealed until it has gone live in other parts of the world, but Niantic confirmed on its blog that Scyther, Venipede and Dwebble will be rewarded for completing certain missions.

The Bug Out Event has begun to roll out around the world. Here’s the exclusive Field Research:

Dwebble, the Bug and Rock-type Pokémon, will have its Shiny form debut in Pokémon Go with the Bug Out event.

Shiny Dwebble changes the Pokémon’s orange-colored body to green, so it’s easy to spot when finding out. 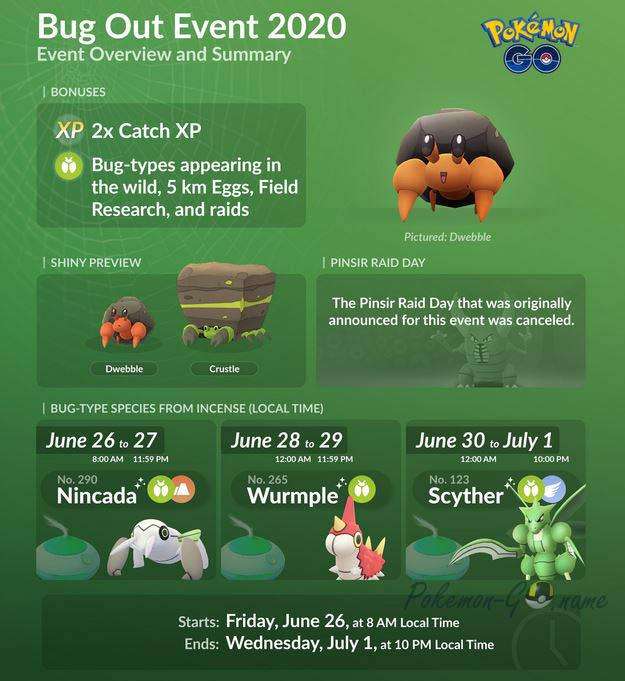 Pinsir is a mediocre Pokemonin the current game meta, so players wont likely be that disappointed with the news. However, the chance to have three free Raid Passes is always a great advantage to have during Raid Day, so this will certainly be missed for this month.

Although the news is a little frustrating, at least Go Battle League Season 2 is coming back to Pokemon Go after the Bug-Out event ends.

What You Need To Know

As promised at the beginning of the month, Niantic has released more details for the upcoming Solstice and Bug Out Events coming soon to Pokémon Go. Both of these events will run for six days each and feature many bonuses.

The Solstice Event will begin on Friday, June 19, 2020 at 8 AM local time and will conclude Wednesday, June 24 at 10 PM. During the event, Solrock and Lunatone will be swapping Regions and Shiny Clefairy will be making its debut. In addition, the event will include the following features:

The Bug Out Event will begin Friday, June 26, 2020 at 8 AM local time and conclude the next Wednesday, July 1, at 10 PM. The event will introduce Shiny Dwebble and include the following bonus features:

Everything you need to know about the event, all in one place. We’ve got a few different researchers lined up to help edit this post, so it should be kept current at all times. A lot of these pieces will be verified by the Silph Research Group, so throughout the post we’ll use the formatting:

Also note that will be used for species whose shiny form is available.

This verification isn’t meant to replace reports here, rather to provide an extra level of verification and depth to the event. Travelers are always welcome to join here and help out with data collection:

Have fun and stay safe this week!

5 km eggs are changing. Niantic hasn’t announced what’s coming though, so let us know what you find! Permanent list here:

The following offers were available from the shop from the start of the event.

Two days after the Solstice event, Bug Out! will begin on June 26.

The world will be filled with glorious bug-type Pokémon while the event lasts, so you can expect to find Pokémon like Scyther much more frequently.

During the event, you’ll also be able to get yourself a shiny variation of Dwebble if you happen upon one in the wild.

Burning incense will also attract more bug-types while the event lasts. But depending on what time you use incense, some bug types will be morn drawn to it than others.

For the first two days, Nincada will be more attracted to incense, following by Wurmple the following today days.

In the final two days, you’ll have a higher chance of luring in a Scyther when you burn incense.